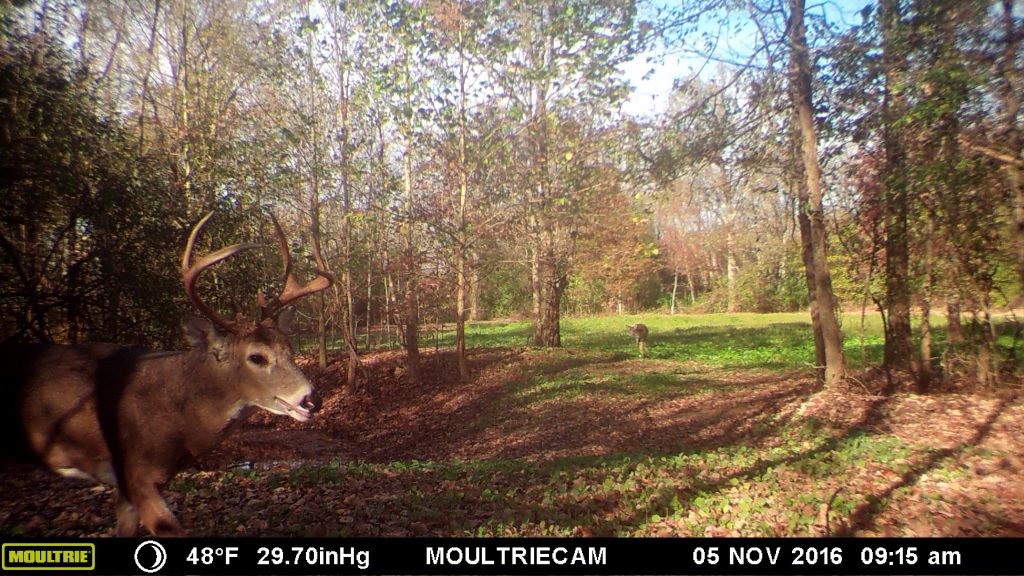 Going in to the 2016 Illinois shotgun season I had really high hopes. For the first time in years, there would be very little pressure on our property. We had also left the property pretty much alone this season with the exception of youth season. If that wasn’t enough, we also have a major cold front that would be moving through during the weekend.  Those three things were adding up to be one of the best gun seasons we’ve had in a very long time. To make things even better, the state of Illinois finally decided to let hunters use bow and arrow equipment during the gun season! I was pumped up and ready to go!

As mentioned, there was a cold front that would be moving through over the weekend. Unfortunately, the opening day of the season was on the front side of the front. With that came some high temps and very windy conditions. On opening day, we had a high temperature of 75 degrees. Add to that sustained winds around 20 miles an hour and it’s easy to see why we had a slow beginning. I saw a total of 3 deer that day, none of which were even close to within range. My brother ended up seeing only 1 deer that day. The afternoon was filled with thunderstorms and heavy rains which kept my brother and I sheltered in the barn. That being said, we were highly anticipating the next morning as the front would be through.

As we woke up and checked the weather, we were delighted to see that the front was in fact past. The current temp was 33 degrees. That’s more than 40 degrees lower than roughly 12 hours prior. As expected, the morning hunt did not disappoint. I saw a total of 8 deer that morning. Each deer I saw was on a mission and moving quickly. Because of that, I was unable to get any decent footage at all to share with you guys. Only 4 of those deer were seen while on stand with a camera ready. The other 4 were while heading back to camp to help my brother with his exciting news.

Around 8:45 am, I heard a couple of gun shots that sounded pretty close. I didn’t think they were from Zack but rather from a neighboring property. I thought nothing of it as I continued to look for deer near me. Just then, my phone started buzzing. Sure enough, it was a text from Zack telling me that it was in fact him that had shot. On top of that, he had a buck down! 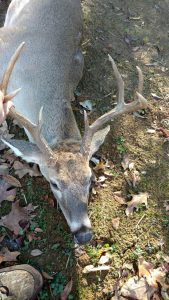 The news definitely helped warm me up because it was a freezing morning! The wind had not yet died down and I had not chosen a stand that was enjoyable in bitter cold winds conditions. At the time of getting the text from my brother, it had been about an hour and a half since I had seen a deer. I guessed that most of the morning activity was over and happily agreed to help drag and gut my brother’s buck. I walked down the hill towards the cabin. 4 does were walking up the hill as I did. They saw me before I saw them and off they went in the opposite direction. I retrieved the Kubota and headed up to the top field where he said he would meet me.

He had told me that it was the old 7 point that we had seen on trail camera (pictured at top). I pulled up to see a huge smile on a hunter that had not had luck in over 3 years. I wish I could say it was just shotgun season, but he also hunts with his bow. Watching him struggle over the last few years has really helped me realize how fortunate I am. Not only for the time I get to spend in the woods hunting, but also the successes I’ve had over the last few years as well. As it turned out, I don’t believe that he did harvest the old 7 in the cover photo. We’ve watched these 7 pointers grow up for the last couple of years and I believe the one that Zack shot was either the 2 or the 3 year old.

After helping Zack gut his buck and get it back to the barn and hung up, I immediately headed back out to the stand. I hoped that the mid morning movement would also translate in to early afternoon movement. Especially since the weather was still cold. I made the decision to head back down low in order to stay out of the wind. I took my climber out with me with the intention of locating a new spot to try right away. Heading to an area of the property that we don’t generally hunt, I located a scrape tree back in the woods with a single bed less than 30 yards from it. Plus, the terrain map shows that it’s a perfect intersection for deer looking to change elevations with the most gradual walk possible.

I picked a tree and began climbing. In hindsight, I definitely picked the wrong tree for bow hunting and the wind. I was happy I also had my gun. With the height of the tree, I was above the shelter of the bluff that was blocking the wind. That effectively made my wind travel the opposite direction I wanted it to go. To make a long story short, I ended up only seeing 2 deer that afternoon. They just so happened to be the same pair of does I had seen that morning.

After a very discouraging afternoon the night before, I was down to my last hunt before having to make the 6 hour drive back home. I decided to head to the spot where I had taken my only Sunday shotgun season deer. The difference was that I had my climber. That allowed me to be up in the air instead of on the ground. This shotgun season just wasn’t meant to be for me.

That morning, I had the same 4 does that spooked the previous morning get spooked again. I’m not even sure how. It was long before they were within range of seeing me. They must have smelled something that they didn’t like.  Most likely the coyote that had come through about 30 minutes earlier. 10 minutes after that, another doe came trotting through with her tail high and wasn’t about to stop for anything. The brightest side of the morning was 5 minutes before I had to start packing up.

Two does headed uphill to my left with a really nice buck following them. It happened fast. I pulled up my gun to take a shot at the buck. The problem was that they were on the side of the tree that the sun was on. All I could see was glare when looking through the scope. As they continued to move away from me, I grabbed my grunt call and grunted at him. That didn’t work. I then snort wheezed at him which stopped him and the does in their tracks. I then threw out a doe contact grunt followed up by a buck grunt. That made the does start trotting straight in my direction with the buck in tow. As I moved my gun to ready for a shot, the sun glared off my gun.

Conclusion to My 2016 Illinois Shotgun Season

The does saw it and ran back in the opposite direction. Again, the buck followed. That would be the last 3 deer I saw. I packed up and climbed down the tree empty handed for the gun season. This is my 16th Illinois shotgun season and I can only remember a couple of times that I did not come home with a deer. I still had a very successful weekend despite the lack of harvest.
Two things happened. First, I found a new stand site that will take very little and should produce quite well. Second, I was able to locate several different specific bedding sites. One with 3 beds, one with 2 beds, and one with 1 bed.

With two improvements, we can create multiple different stand locations with a great travel corridor. I’m very much looking forward to this post season to get these projects completed. Besides, I still have a month and a half to head back down for another hunt. Happy Hunting!