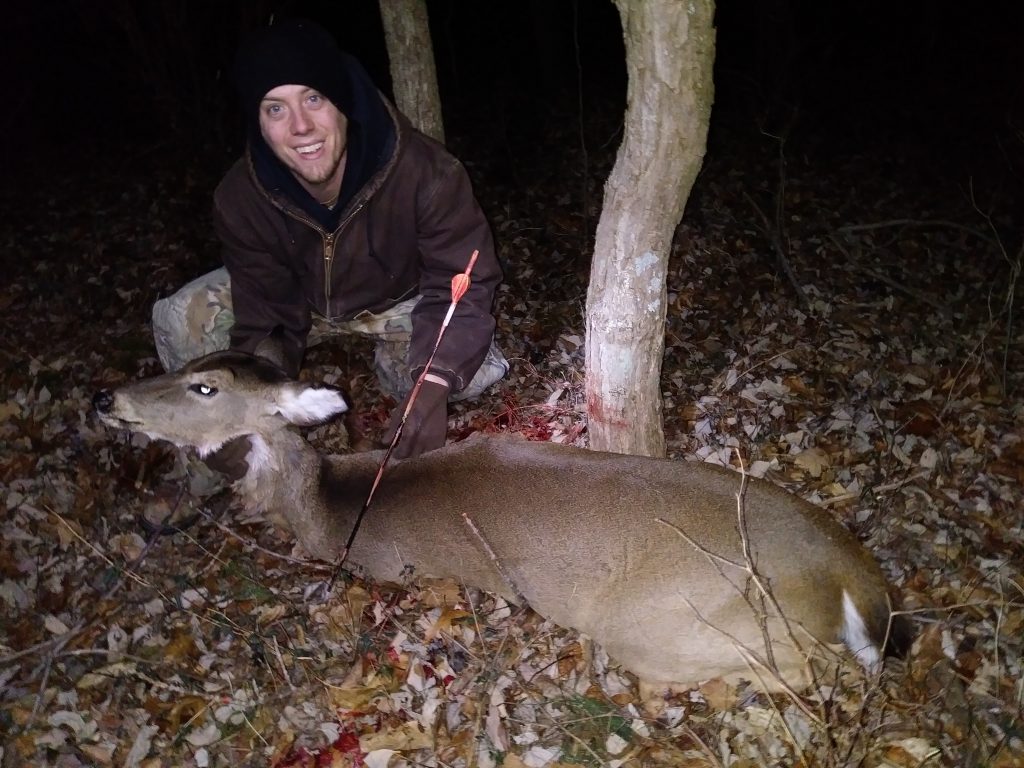 A Change of Scenery

After having a very rough start, I decided to make a trip down to Southern Illinois.  So, I recruited my wife, brother, and his girlfriend to head down for a weekend of hunting. Well, for me and my brother at least. The first morning started off great! As soon as the sun came up I noticed that there were turkeys roosted all around me. Much to my dismay, not a single one of them flew down anywhere near me. The Turkeys made that morning entertaining. The afternoon didn’t turn out much better. I saw a single deer that wasn’t close enough to confirm if it was a doe or a buck.

That evening, the temperatures dropped to near 0. We hadn’t thought about how cold it was going to get so we didn’t leave the water dripping to avoid a burst pipe. Needless to say, the pipes froze.  15 minutes before my alarm went off my brother was informing me that we had a big problem. I got up to check out the situation and became extremely disappointed in what I found. One of the PVC elbows completely snapped in half with solid ice poking through. I immediately knew that the morning hunt would be cancelled so there was also little chance that I’d be headed out for the afternoon either.

After spending an hour assessing the damage and coming up with a plan, we headed to the nearest hardware store. That store is a 45 minute drive. The first order of business was to get a propane space heater to thaw out the pipes. Then we gathered the rest of the supplies we needed to replace the elbow and headed back to camp. After hours of waiting for the thaw out and then trying to release the shark bite fitting, I finally got ahold of my dad to let him know what was happening.

I didn’t prepare myself for the reaction that I received. He told me to not worry about it until the weather warmed up so my afternoon hunt was saved!

I told my brother the good news but he had already started enjoying some cocktails. I rushed to get ready and headed out for the last couple hours of light. Right after getting settled I saw 4 does. I was unable to get any good footage of them since they stayed more than 65 yards away during the entire encounter. From there it was quiet until the last 20 minutes. Three does came from behind me and ended up almost directly down wind. The first 2 caught my wind and quickly moved out of range. Luckily, the third doe stayed still long enough for me to get a 30 yard shot on her.

Just after the shot, my camera battery died. So, I packed up my gear and headed back to camp. I got my wife and brother to help with the tracking. As it turned out, I had made a horrible shot that hit the perfect location. The deer had piled up just past where she left the camera frame. The blood trail was enormous. It felt really good to have luck on my side for the first time this season.

Please take the time to watch the footage from the hunt. It’s also a recap of the final 2 weeks of the hunting season for me. The last weekend of the season turned out to be interesting. Hope you Enjoy!