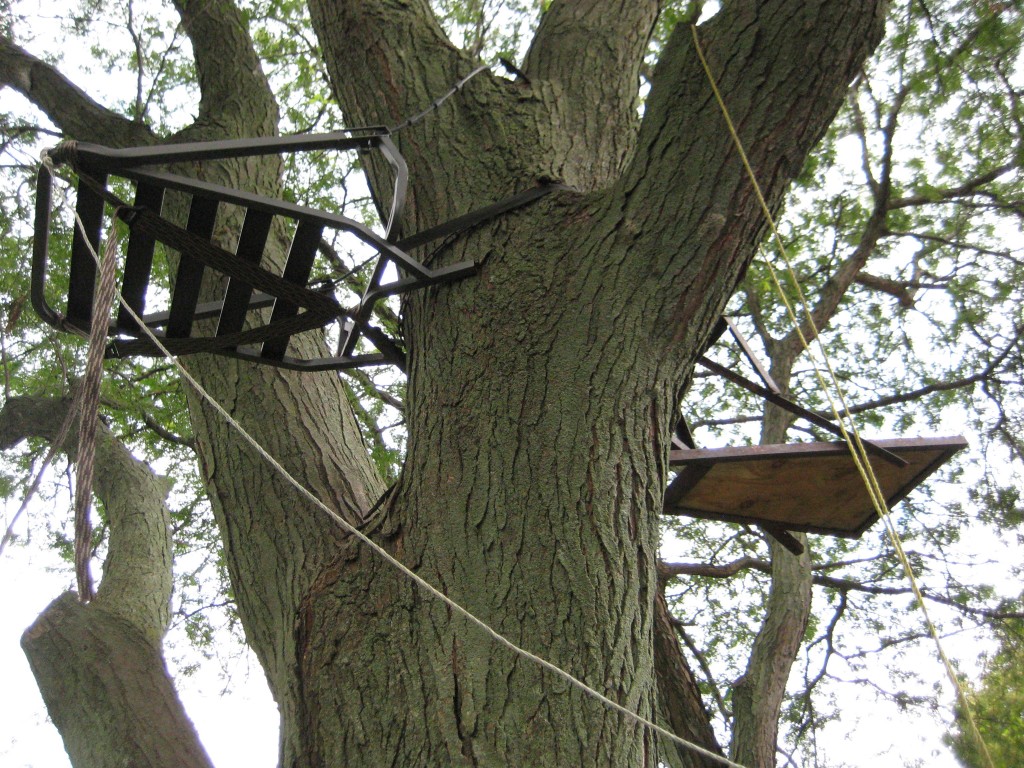 One of the number one things when it comes to archery hunting tips is that you must practice how you hunt. Many people, including myself, like to practice while standing up with nothing around them as obstacles. Unfortunately, that is pretty much never going to be the situation that you find yourself in when you’re out actually hunting. Practicing this way is great in order to tune and sight in your bow, but after that time-frame practicing in this manner is not to your advantage. Take the time to set up a real hunting situation. If you hunt from a stand, find a tree that you can put a stand in to shoot from. If you also hunt from a ground blind where you take sitting down shots, then a make sure you include sitting down shots in your practice regimen as well. If possible, set the blind up so you can practice shooting from it. You won’t be able to get any closer than that to a real life situation. The picture above shows two stands that I have set up in a tree in my back yard. One is the stand I use because of safety reasons, but I leave the other up because it simulates the added distraction of another stand if I have a camera person with me and will support my daughter if she wants to shoot with me. You’ll also notice in the pictures below that each of my targets are deer, not dots. This is because I have not seen a deer yet that had a dot where I wanted to hit it. Take aim at something that actually resembles what you’ll be shooting at in the field during practice and you’ll be happy you did when it’s the moment of truth.

If you are shooting from a stand while practicing like you should be, it’s a bit of a pain in the butt to have to get down and move your target constantly in order to practice multiple distances. The way that I have found works the best for me is to set up three different scenarios so that I am able to take 3 shots at a time without risking having my arrows hit each other. This also helps simulate real life. When is the last time you were able to take multiple shots at a deer standing in the exact same location? Though I have told myself that I will not take a 40 yard shot at a deer, that is the long shot that I have set up for practice in the yard. 40, 30, and 20 are the three stations, with each deer target facing slightly different to simulate real life scenarios. Rarely do we get that perfect broadside shot in real life so I don’t have any of them set up at a true broadside angle to my stand. Two of the targets are extremely portable so I will move them around to different yardages so that I can practice that as well because again, it’s not likely that a deer will be at a perfect 20, 30, or 40 yards. Even if you are only able to make a scenario that is under 20 yards, that’s still something and will go a long way in making you ready for that shot of a lifetime. 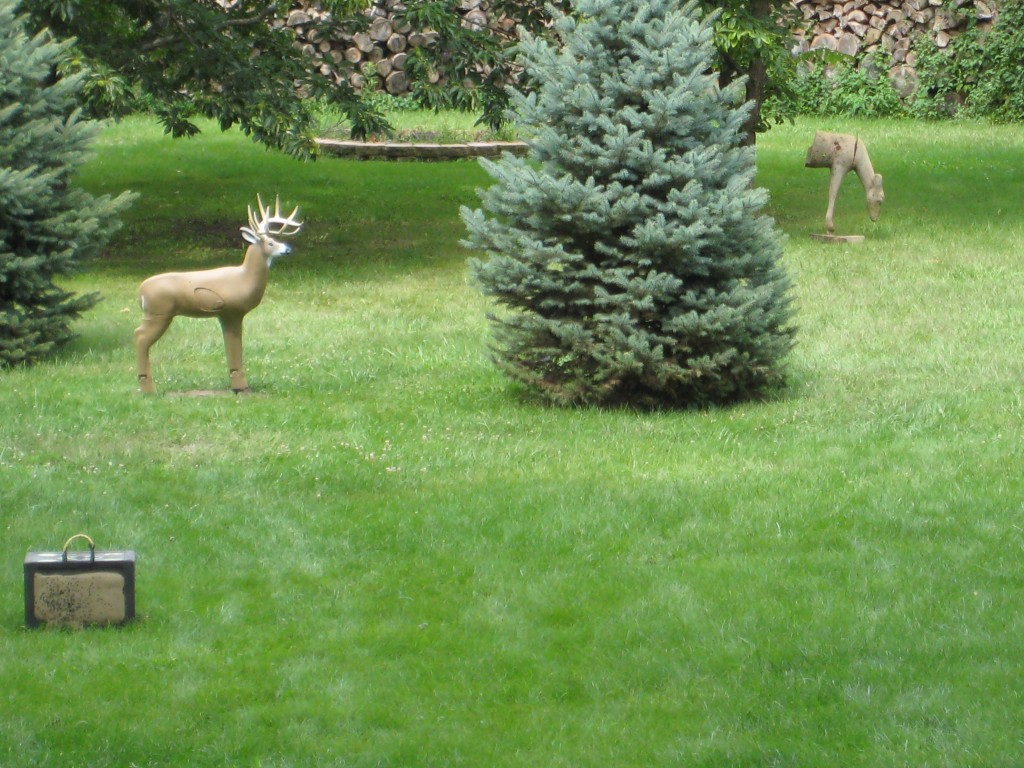 Many people will advocate for taking as many shots as you can prior to the season so that you can build up arm strength and muscle memory. While both of those things are important, I try to make both of those things unnecessary to worry about. One, I shoot my bow all year. From the hottest day of the year to the coldest, I will go out and at the very least take a single shot. Though it doesn’t seem like much, it is plenty to keep the muscle memory in tact as well as the arm strength. I make a point to get out every single day to shoot no matter how busy I am. Chances are, you can do the same.

If you compare the picture below with the picture above, you’ll notice that the below picture is a close up of the target in the above photo. From the farther view, it looks as though I’ve made a perfect shot. But, the close up picture reveals that my angle is slightly back, which means my shot placement was slightly back from where I should have been aiming. Either way, this is a kill shot and I’m very happy about that, but I take the time to fully analyze each shot and what kind of damage I could expect from it. This will help me in the future when I am either looking back at film to decide how long to wait before tracking or watching the impact from the stand. Also notice in both pictures the relative place of the arrow on the deer. I did not aim for center of the deer. Instead, I am aiming for the heart which lies in the bottom third of the deer. By practicing from a stand at a realistic deer target, you will be able to analyze your own shots and what vitals you may have hit. 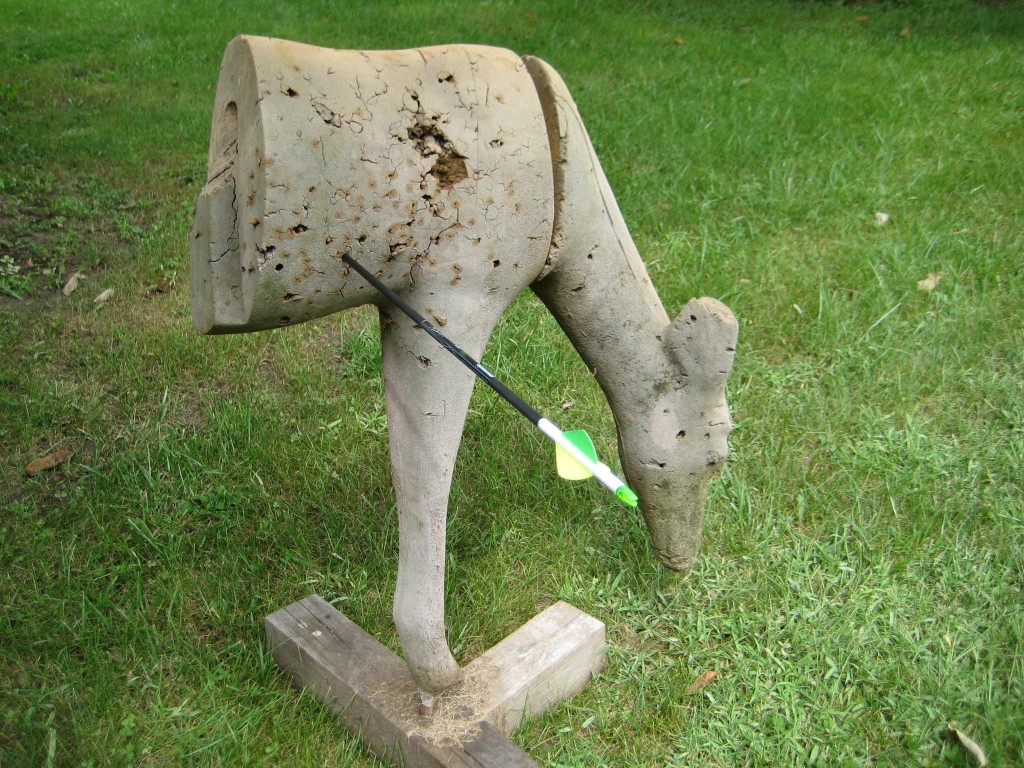 Practicing for real life situations can be tough but if there was a holy grail for getting ready for the stand, this is it. Each time you are out there shooting from a stand or sitting on a chair shooting out of a blind for practice, you are getting yourself one step closer to bagging that deer of a lifetime when the moment presents itself. Take the time to learn from each and every shot you take. If you make a bad shot, don’t worry about it, learn from it as though it happened in the field. Ask yourself what kind of blood trail your shot would create. Is your shot placement worthy of immediately getting on the trail or placed in a position where you need to back out for a few hours? Get detailed, get imaginative. Create shots where half your target is behind a tree or where your only shot is to slip your arrow past a tree. The more creative and confident you can get while practicing, the closer you are to bagging that buck of a lifetime when the shot presents itself.