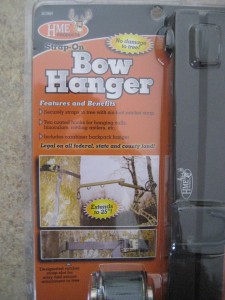 Looking For The Best Bow Holder

You may or may not have read my review of the Primos Bow Holder. If you did, then you may remember that the only real complaint that I had was the amount of time and effort needed to screw it in to the tree. Never the less, it was all I had and so I made due with it. That is until I finally found the best bow holder on the market today. Though I was making due with the Primos Bow Holder, I was really looking for a bow hanger that I could strap to the tree because it’s just plain easier and faster. Not only that, the use of screw in steps or bow hangers is illegal when hunting on most public land. I could have gone with a bow holder that connects to my stand, but that would require me to have one for each and every stand just like the screw-in type. For some people, that may not be an issue but that’s not something that I want to do.

Once I finally found the HME Products strap on bow hanger, I knew that I was looking

at the best bow holder on the market. Not only is it quick and simple to put up, but it is also strong enough to hold your backpack. Having this one piece of equipment has eliminated two different screw-in items that I used before. The first one would hold my backpack and the second would hold my bow or gun. Now with a single strap I can hold both items without the fear of them falling. Even though I am now carrying in and setting up more gear because I have started to self film my hunts, it takes me less time to get set up because I don’t have to sit there screwing in my bow holder. As a person that does not have an unlimited supply of money, it’s nice to know that I’ve always got a way to hold my pack and bow/gun no matter what stand I end up sitting in. The other big reason that practicality. Why would anyone want to buy a bunch of “permanent” bow hangers for each stand when you could buy a single one that is extremely fast to set up when you get in the tree. I was only able to use this for two sits this year because it was a very late addition to my gear but I am excited to use it for many seasons to come. Happy Hunting!