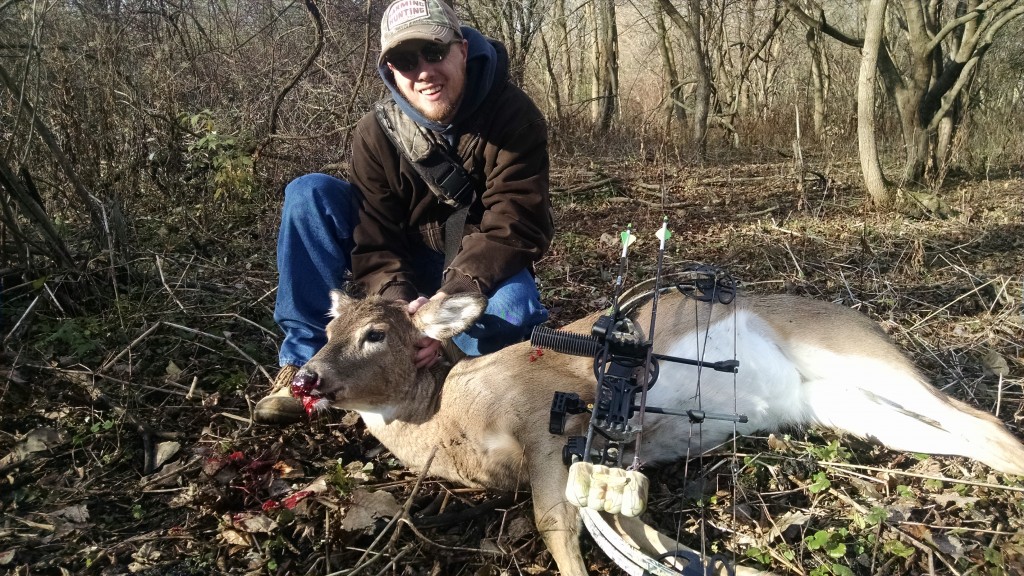 I headed to the woods early Saturday morning. After looking at the weather, I could tell it was a can’t miss day to be out there. We had several miserable days in a row that included rain, clouds, warming temps, and lots of wind. Though at this point it should be obvious, the hunt ended with a big doe down. I was hunting at the funnel spot that morning and had told my wife that I would be home by 9 am to make my eggs for our big breakfast. I got to the property with about 20 minutes left before legal shooting light so I had to hurry it up a bit. As I approached my tree, I happened to notice that the other hunter had not taken his treestand out like I was told he had, so instead of taking the time to climb the tree I had picked out for the climber, I climbed up in to the treestand that was already there and settled in. The bad part about using the latter stand instead of the climber is that I have nowhere to attach the camera to so I was unable to film the hunt, but it saved me a good 15 minutes that I couldn’t really afford to spend making noise climbing.

Big Doe Down – The Hunt

Legal shooting light was at 6:09 am. Prior to that, I did hear one deer walk through. It was not close enough for me to make out if it was a buck or a doe, but I know for sure it was a deer. After that, it was pretty quite until around 6:35 when I saw a big doe begin to approach. She was walking calmly but was being extremely cautious at the same time. She would take a step or two and then just stand there watching for several minutes before deciding it was safe to take another couple steps. For the first 12 minutes of our encounter, she only came in from 60 yards to about 50, all the while looking behind her intently. Cue the mature buck. As he stepped in to my view in the same spot the big doe had, I knew immediately that he was a mature shooter. Here is where my big mistake was made. I was too afraid of spooking the big doe, so I did not immediately raise from my seat it order to begin getting ready for a shot at the buck. I can assure you that mistake will never happen again. As the buck neared the big doe, he gave her a sniff as she trotted away from me. He then turned and began walking the trail directly at me. Though I was up in a treestand, I felt fairly comfortable that the buck would easily pick me out if I tried to stand up. As he stepped over the fence where I could shoot, I couldn’t believe that I still could not get up! 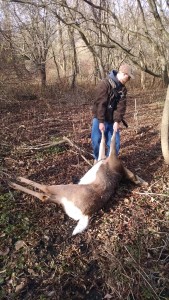 At this point, he is under 15 yards away and about to hit the path that I had to use to walk in due to a newly downed tree. The buck stepped behind a big tree and I took what I knew was going to be my only opportunity to move and stood twisted and began drawing all at the same time. Unfortunately for me I never got the bow drawn back because the buck move passed the tree and immediately stopped to look up at me. I pretty much knew I was done for as I stood still as a statue partially drawn back. He took a few more steps and stopped to sniff the ground (my footprint I’m sure) and then took a few big quick steps as he entered a thicker area effectively ending my encounter. As I stood there stunned at how awesome the buck was and how bummed I was about not getting the shot off, I hear the big doe coming back my way.

Big Doe Down – The Shot

I turned to see her about 40 yards away on the same trail the the buck came through on. I prepared to take draw back where she would cross behind the tree and take the shot after she stepped out. Of coarse, the big doe did not get my game plan and started walking along the wrong side of the fence away from me. Luckily, she only took a few steps and started to browse on something. After that, she turned around and began walking back towards me along the fence but passe right by the opening that I expected her to use. I was still facing the opposite direction in order to get the shot where I thought it was going to be. As she walked and I listened, expecting her to walk along the fence all the way out of range, I couldn’t believe my luck when I heard her hop the fence only 20 yards behind me. I immediately got turned around while she was behind some brush and was just starting to draw back as she stepped past it and noticed my movement. She stopped and stared right at me as I settled the pin and let her fly. I could tell right away that I had a better hit than it looked like because she was pouring out blood almost right away. I watched the big doe run and then subsequently crash before getting off the 11 acre property I was hunting only 60 yards from the stand.

Big Doe Down – The Recovery

It was an absolute perfect can’t miss morning to be in the woods and I had an absolutely awesome hunt. I was fortunate enough to harvest a big mature doe. This was my first harvest with the Rage 2 blade broadhead, so look for an update to the review to happen soon. The shot resulted in a double lung hit. Clipped the top 2 inches of the close one while gatting a direct hit on the far lung. The broadhead then went through the opposite side rib cage but was unable to break through the hide on the far side, a total of about 12 inches of penetration. I couldn’t be happier with the big doe that I was able to harvest despite messing up the mature buck opportunity. She is already mostly butchered and tenderloins have been consumed. Happy Hunting!