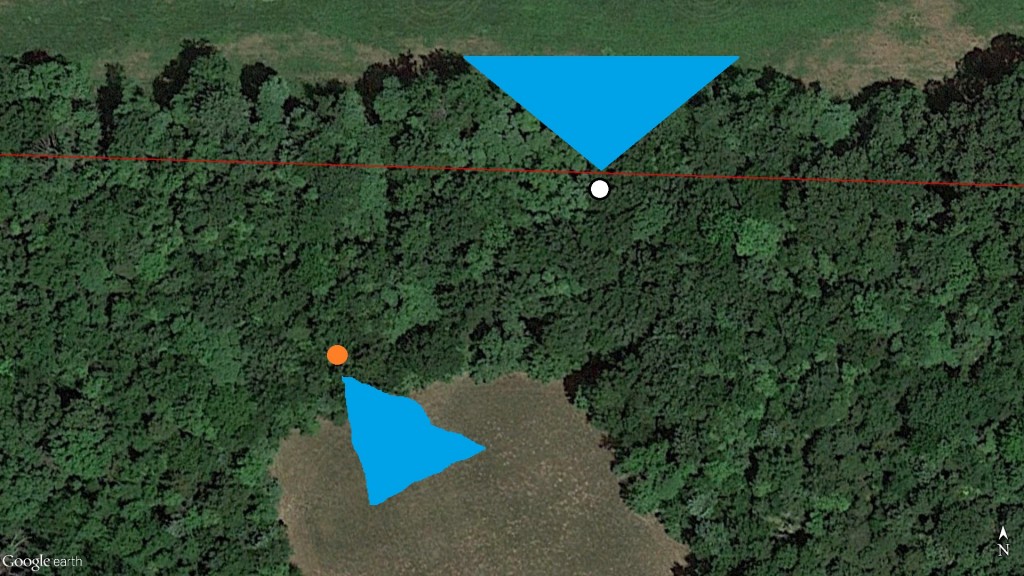 For the longest time we only gun hunted on our 80 acre piece of land in Southern Illinois. As the passion for deer hunting began getting stronger, we started looking for a way to spend more time doing what we love. Luckily, bow hunting was an obvious way for us to do that. However, since we were just getting in to bow hunting, we didn’t have any stands that would really work for bow hunting. For the past couple of years, we have continued to hunt our gun stands that could potentially offer us a bow shot as well. As this season has progressed and we have seen a change in the deer movement patterns, we decided that it was finally time to get some treestand setups that are specifically geared towards bow hunting.

As you can see in the above picture, I’ve got two different stand locations picked out on the map. I’ve already been in there and know that I have some trees that will work for the spots I picked as well. I chose these spots for a specific reason. First, with having two stands that cover the same area, I will be able to hunt that travel route in several wind conditions. Anything that has a Northerly or Southerly breeze will work. I will have to avoid these stands though if the wind is straight out of the East or straight out of the West. The treestand designated by the White dot will be the preferred stand. Most of the movement will be expected to come from the East, so the treestand designated by the Orange dot will have a slightly worse view than the preferred stand.

I chose this particular spot for many different reasons that I’ll be laying out for you. The main reason is that this little patch of woods is very thick. On top of that, the area is a major pinch point since it’s between two fields, especially with the way the land lays. A drainage ditch runs through there that feeds in to a thick draw. The big buck that I shot this year during the second firearms season dropped down in to that ditch just after I spotted him before coming out of it right in front of me. Another reason for choosing this spot is because I am able to sit on the edge of it and shoot all the way to the other side comfortably as long as I make sure to cut some shooting lanes when we hang the stands.

This off season is going to be an extremely busy one for us. Getting these two stands set up and trimmed out is just one of the many projects we have planned. In the spring we will be having some foresters come in to do some select cutting and it is now time that we re-think each and every stand we have that is movable. Also, we will be looking at what we can do to improve the hunting in our permanent stands as well. That project is going to require some deeper thought since the deer are already pretty used to being hunted from those stands. One thing we did this year was to refrain from using many of the permanent stands in order to let them settle down. The hope is that come next season, at least some of those stand locations will again start producing some decent sightings. Happy Hunting!