How I got Chiggers

First off, let me say that chiggers are the worst! If you have ever had the pleasure of getting chigger bites then you can relate. Otherwise, consider yourself lucky!  I’ve gotten bit by chiggers before but this was the worst I’ve ever had it. To make matters worse, I actually ended up having multiple rounds of bites.  The first round came from doing some food plot work. I was cutting back branches that hung out over the edges of the plot. Then I used the cut branches to block off some trails to try and steer deer towards other trails. I took my shirt off and saw that I was completely covered with chiggers.

The second round came from setting trail cameras up. I honestly was in the woods for maybe 5 minutes total. One location was only 10 yards from the road. I had even sprayed down with bug spray like crazy only an hour before that. Something that I didn’t bother doing the day before. 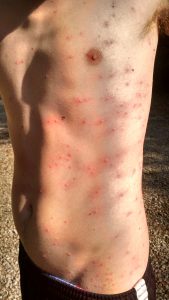 On me, they ended up looking like I had chicken pox! Quite frankly, the pictures don’t quite show just how bad it was. I had them everywhere! My legs and feet were just as covered as my torso.  These photos are from the day after the infestation. When you look at the bites up close, they look like acne. Though I clearly have them all over my body, chiggers will generally stick to the areas where your clothes are tight to your skin.  Ankles, Feet, and private areas tend to be hot spots.

That is not always the case. Being so covered in sweat that my shirt was sticking to me and drenched didn’t help. That caused more areas all over my torso that were similar to wearing socks and underwear. I know what my feet and private area could have looked like. My sweat soaked shirt actually saved me from what I consider to be an even worse scenario. One where all of those bites are concentrated in very unpleasant areas.

How to Get Rid of Chiggers 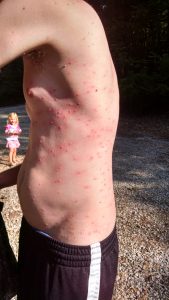 The short answer is you can’t once the bite has occurred. Most of the time you don’t even notice the chiggers on you. You can’t feel them walking on you. The only reason I noticed before I had noticeable (itchy) bites was because there were so many of them. They were especially noticeable on my usually very pale feet. When I took my socks off there were so many new tiny little freckles.

I got rid of them by taking a very hot shower combined with a lot of scrubbing with a loofah. It took a whole of of scrubbing. Some of them I had to pick off with my fingernail. After I was sure I got them all off, I got out and waited for the itch to set in. I was wrong. I found new bites on me every day for the next 4-5 days. As an adult, the itch is somewhat tolerable in most cases. Not in mine.  I scratched so much that I can’t believe I didn’t start bleeding all over the place.

A person can only take so much of feeling itchy. I needed something to sooth myself so I didn’t end up with scars. My father ran to the store and came back with some Calamine lotion (Here is a link to it on Amazon). It does take a few minutes to take effect. To be fair to the lotion, you are rubbing all of the itchy spots to put it on. I used it once a day, right before bed for about 4 days.

How Long do Chigger Bites Last?

It only took overnight for the itchiness to start. As mentioned above, the super itchy part lasted for about 4 days. If you did end up scratching them all open, you will still have scabs. The scabs lasted roughly another 3 or 4 days. As I type this, it’s been 3 weeks and you can still see quite a few of the bite marks on my feet. These time frames are from the time of the bite. So thankfully the first and biggest round of bites were the first to stop itching. Also, this is just my experience. Your body may react differently than mine. For your sake I hope you have a more favorable reaction. I wish the best of luck to anyone that ends up having a worse reaction than me.