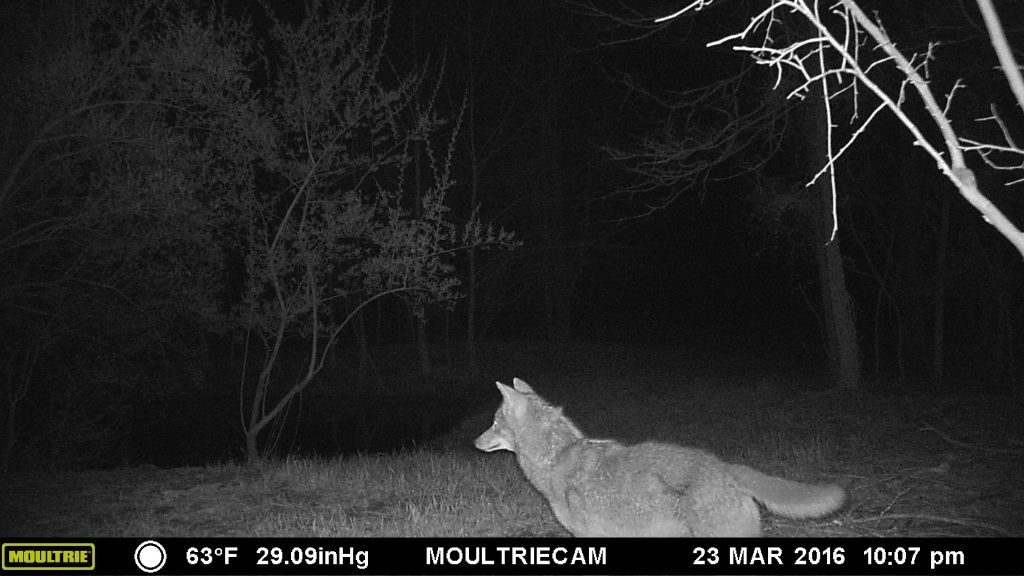 Coyotes in the Past

Historically, we’ve never really seen a whole lot of coyotes on our property in Southern Illinois. That’s not to say that they weren’t around, but we rarely caught a glimpse of them when we were there hunting. On top of that, before the cabin and bunk house were built, we were ONLY there during the shotgun season. Even now, we rarely see coyotes while we are on the property even though we are there a whole lot more than we used to be (which isn’t really a good thing, that  topic is touched on in the article Deer Hunting Strategies – Family Differences). Over the last couple of years, I have deployed some Moultrie Cameras to help get a better idea of what’s going on while we aren’t there. During those last two years, I have captured more and more pictures of multiple predators, but most notably coyotes. One thing I’ve noticed about all the coyotes sightings is that a vast majority of them are at night.

Land managers that find themselves in a similar situation as ours actually have many options available to them. Personally, I would say that starting a trapping hobby would be the most preferred option if you are legally able to do so. If that’s not for you, it shouldn’t be too hard to find a trapper willing to set a line on your property if you look in the right place. I suggest putting an add up at local hunting clubs as a starting point. Another option is doing a little dirty work yourself and plan some predator hunts to help thin them out. If none of these options will work for you, then you may have a rough go of it for a while. As with everything in life, the predator population is no different in that it will rise and fall according the resources in any given area.

So, What’s the Plan?

At this point, it’s going to take some thought. Because we aren’t close to the property, we can’t trap since the law states that traps must be checked every 24 hours. Unfortunately, that eliminates the most preferred option. At this point we can either do some of our own hunting or allow someone else on the land to do the trapping for us. One positive spin that we can put on the increased predator sightings is that we are starting to attract and hold more prey species and therefore have more food available to sustain the higher predator populations. The family is going to have to get together to discuss the issue pretty soon before the coyote population gets out of control.

Though there are several options for helping to control the coyote population on land that you control, some, if not most people are unable to take advantage of the most preferred method of starting your own trapping program. If you have one that has been adopted then consider yourselves ahead of the game when it comes to predator control. For the rest of us, we can only do what we can do. If you have a free weekend to do some predator hunting, then do it. If you are able to find a trapper that is willing to add your land to his rounds, you too are in a better position than most. Now is the time to take a look at the predator population. It doesn’t have to be scientific, but having a rough estimate of how many different predators and their relative populations can help you plan for the future of not only your deer herd, but also many other game species. Happy Hunting!