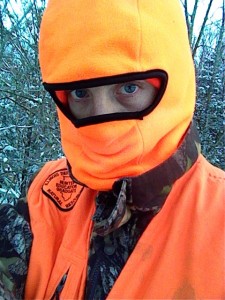 Amy and I chose to go hunt a location that nobody had been to since the first day or so of the first firearms season in Illinois. While in camp, we had one deer hunter that likes this particular spot and had mentioned finding a climbing treestand that didn’t belong to anyone in camp. A note was attached to the stand informing the person that they were on private property and to remove the stand or lose it. Since it had been a few weeks, I was instructed to remove the stand if it was still attached to a tree on our property at the end of our evenings hunt.

As my wife and I walked back to one of the farthest parts of our hunting property, we were lucky enough to follow a group of 25 turkeys. Every time we got within site of them, we would stop and allow them to continue on towards where we were headed before following until we got to the location we wanted to set up. Upon getting to the location, we immediately found the climbing stand that was on our property from the trespasser. I decided to climb the tree with the stand to get a better view for filming while my wife stayed on the ground hidden between a couple trees. No more than a minute or two after getting up the tree and settled in, we heard a cough. Immediately we began looking around to see if we could see any blaze orange around us in the woods. We didn’t see anyone, but we knew they were close. Throughout the evening, we heard several more coughs until we heard the crack of a shotgun before seeing 5 does run along the ridge on a neighbors property. Within 30 seconds I spotted the hunter and continued looking for deer.

During the afternoon, the neighbor was also hearing my wife cough periodically as well. About 30 minutes after the shot, we watched as two hunters climbed down from a treestand and began looking for their deer. After finding the doe and pulling her back up to the field they were hunting over, they preceded to come walking in our direction. Once spotting me (which obviously wasn’t very hard since I was wearing blaze orange while sitting up in a tree), they walked directly to the property line the climber happened to be by. I was only 10 yards from a 3 way border between us, the state, and the neighbor, but facing towards ours and the public state land. After a brief unfriendly conversation with him, he decided to walk all the way around us while staying on his land, but also in the trees where he could make as much noise as possible and ruin our hunt. I can only assume that he assumed we had no hunting morals and were going to shoot a deer on his property because as he walked away he said ” Well I guess just don’t turn around and shoot in to my field”. 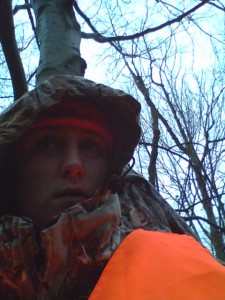 Whether it’s trespassers or a paranoid neighbor, it’s never fun to have a hunt interrupted. Over the years we have had several instances with our neighbors. I wish that our relationship could be different, but as of yet we have not found an effective way to communicate. I believe that I gave enough information here for my neighbor to recognize our encounter from this past weekend. If so and you are reading this, please feel free to contact me for an open discussion on what is causing the turmoil. I know that it’s not the closeness to the border that is their problem because they have at least 3 treestand locations that are actually on the property border line. From each spot, they could easily be shooting deer off of our property and we would have no idea since we aren’t able to be there all year long. I just hope that the reason they are so paranoid about us shooting in to their field is not that they are doing that very thing to us so they assume we would do the same. Hopefully you have a better relationship with your neighbors as we have had with ours. Happy Hunting!