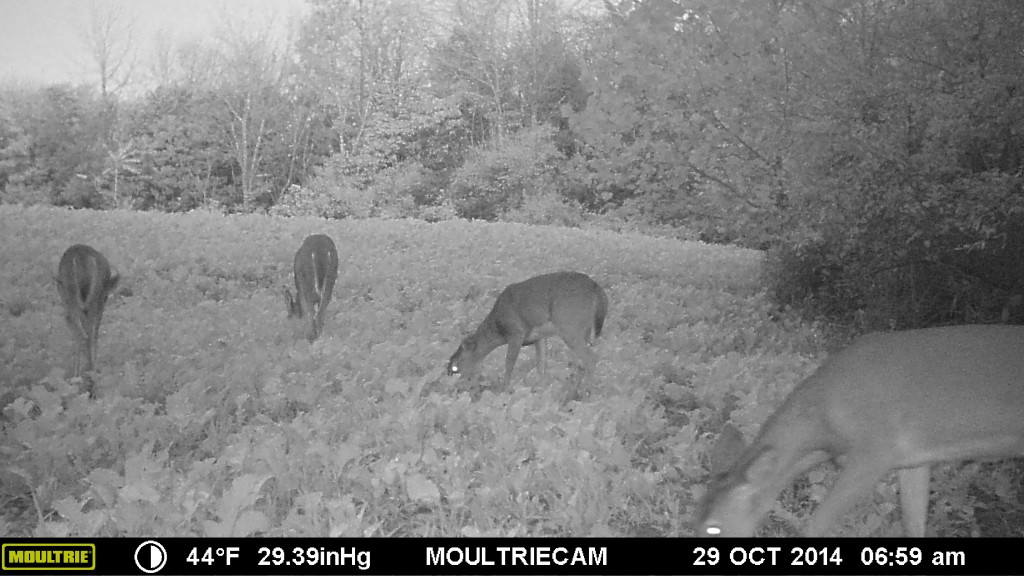 Doe Deer – How many do you have?

The very first question you must answer in order to know if you need to be taking does off your hunting property is how many does you actually have utilizing the property. The easiest way to do this is to take a trail camera survey (directions on how to do that can be found on QDMA’s website Here).  If you walk through the woods, do you notice an obvious browse line? When hunting, do you see large doe family groups? Though a large doe family group is not necessarily an indication of too many does, an obvious browse line most certainly is.  By large doe family group, I am referring to one that seems abnormally large. The group of does in the trail camera photo above actually consists of 9 does. A group of 9 does that stick together is a sign to me that we need to remove some of them. This group is not the only family group we have, but it’s by far the biggest, and was a definite target for us during the 2014 gun season. We have doe family groups that consist of 4 does which is the average for us and then there are also a few loner does milling around. Some of these doe family groups do not bed on our land, including the group of 9. That fact is also a huge factor in deciding to thin out some of those does. I will not be taking does that both bed and feed on our property because those are the buck magnets you want to keep around for the rut.

There is always going to be debates on this. Some say that you should take out the does early so that you are not taking out does that have already been bred, effectively killing three deer with one shot. 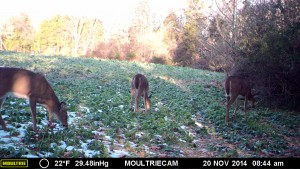 Others say that you should shoot the does during the late season so that they are around to help attract the bucks and take them past your stand. In the past, I was one who would wait to shoot does, saying that I want them around so the bucks come around. This argument is really not flawed, but there is much more that needs to be considered before blindly passing on does during the entire early season. During the past two hunting seasons, I have let does walk all the way up until mid Decemeber, waiting for the majority of the rut to be over before looking to fill the freezer. By doing this, I have actually eaten tag soup for the last two years worth of bow hunting. I was able to connect on a doe during the 2014 gun season, taking the shot during the last morning of Illinois’ first gun season in late November. This year, I’m taking the opposite approach for a couple reasons. First off, our property has too many does. We need to thin out the herd so that we make the bucks travel a little more to find a doe. And second, I have eaten tag soup too often by not filling that doe tag early in the season. During the 2014 season, I passed on at least 20 shot opportunities on does during October. It’s time I fill a tag and help feed both my family and others whom are less fortunate than I. That being said, I will be taking out the young does. By leaving the older does alone and taking the young ones, I will be keeping the same does around for years (in theory). The exception to this would be a mature doe that seems to pick out hunters left and right, blowing constantly and clearing the area.

More often than not, the decision to harvest a doe deer is a good one. In my case, we have at least one doe family group that could use some thinning out. At the camera location where the below photo was taken, the amount of doe pictures far exceeded the amount of buck pictures. Though I know not all the deer in the area will pass by this exact spot, a huge majority are. There is a highway sized entrance to the field there where the doe family groups enter just to the right of the camera and a really well used buck trail that enters the field just to the left of the camera. In the end, the decision will lay solely on your shoulders. If you hardly see any deer in your area and can see that there is clearly enough forage for the deer to eat, then by all means, pass on the does. However, in areas where deer are abundant, deciding to take a doe during early season could have a positive impact on your upcoming rut hunts. Happy hunting! 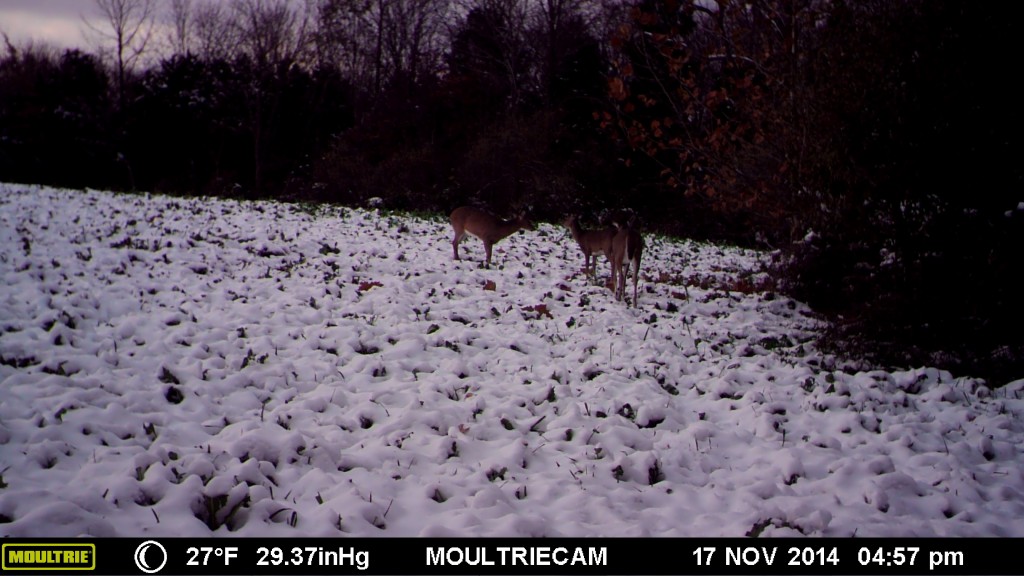