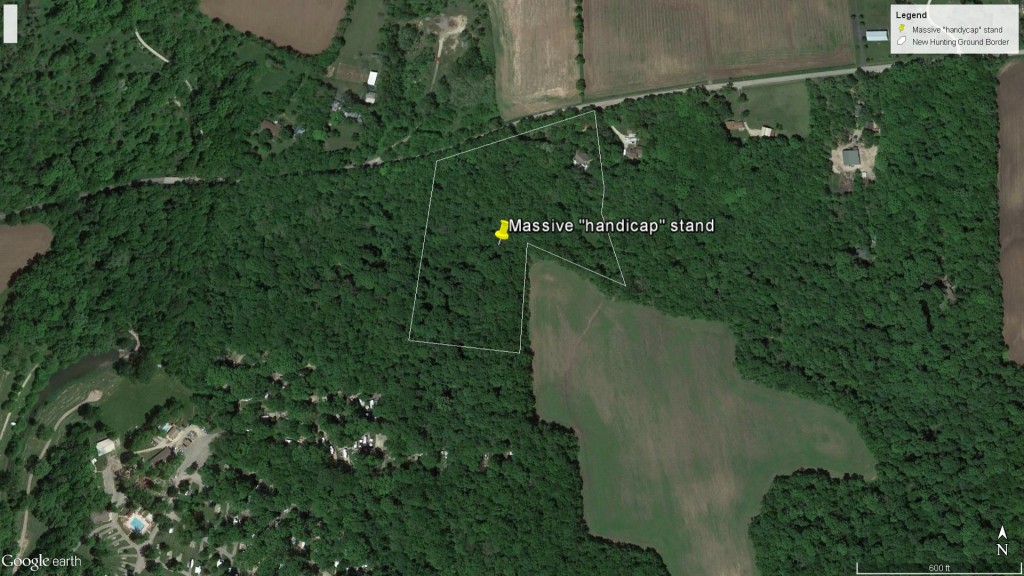 Well, yesterday evening (October 3, 2015) I finally got out for my first deer hunt of the season! My wife and I were so pumped to head down to our spot in Kendall County Illinois for our first deer hunt on the property. After getting geared up and ready to hit the woods, we had a quick chat with the landowner before heading out to the stand.

As mentioned, the hunt took place on the evening of October 3, 2015 at our Kendall County permission property. We had a solid 10-15 mph wind coming out of the NorthEast so we sat in the stand known as the Handicap stand since that offers us the best opportunities for a NE wind. We had a late start out to the stand because we had a last minute wash we had to do on my wife’s camo because of mold/mildew issue discovered in our house. So, we got to the stand about 3:30 and were pretty much settled in after getting cameras set up and gear all in place by 4 pm. That gave us a solid two and a half hours before sundown. 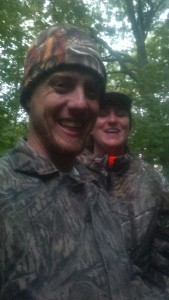 So this was my very first time bringing a camera out to the stand with me. When you watch shows on T.V. or Youtube and you constantly hear them talk about losing camera light on their deer hunt. Well, believe it or not, we lost camera light right at sundown. I had no idea that it would be that quickly, where we would lose the entire 30 minutes after sunset. Granted, I am not using a professional camera by any stretch of the imagination. It’s simply an old point and shoot camera that is old enough to not have any HD capabilities but since it’s digital it does have a video mode. As those two and a half hours passed without seeing any deer, we did at least get to learn a few things. First off, when the weather says that it’s a NE wind, on this property that apparently only means above the canopy of the woods. When you looked up, it was clear that the wind was indeed coming out of the NE like we thought but as you sat in the stand below the canopy the wind was actually going in the exact opposite direction. At our level, the wind was blowing at a constant speed out of the SSW and heading straight for the area I expected deer to come from. We were unprepared for that (lesson #2) since we’ve never hunted the location and did not have our climber that we would need for the location picked out for that type of wind. Needless to say we were a little bummed about that but definitely enjoyed our time together on stand anyway since we don’t get to hunt together as much as we’d like. All in all, we had a very enjoyable first deer hunt of the 2015 season and look forward to many more as we learn about this new property. Happy Hunting!

One comment on “First Deer Hunt of the 2015 Season”