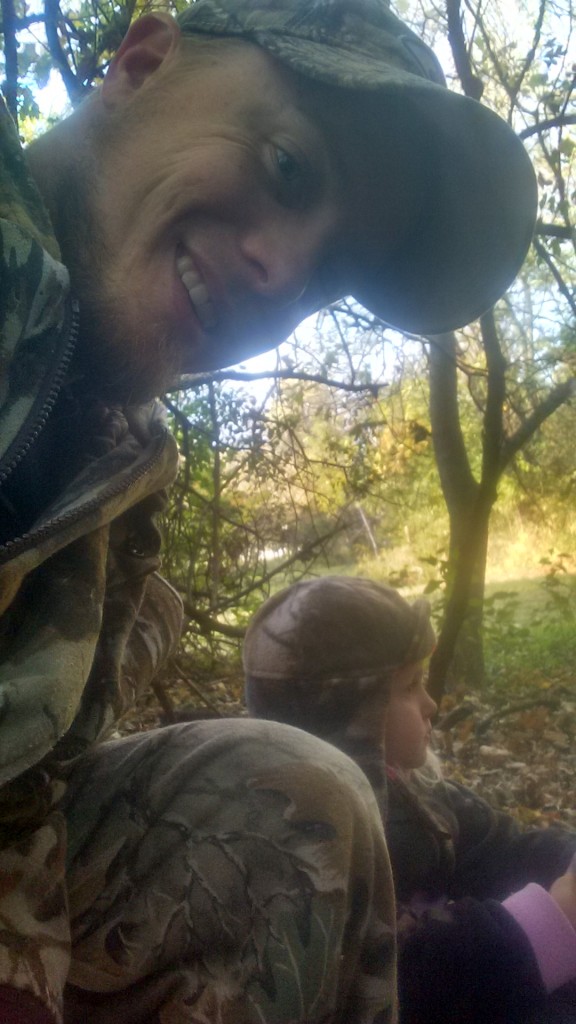 How I got Hunter Kids

Honestly, I think I just got lucky. At least, so far that is. My oldest is 3 and has been asking to go hunting with me for about as long as she has been able to talk. Since the day she was born I’ve been showing her camo and wearing camo all the time and talking about hunting and how much I enjoy it. Naturally, since I’m her daddy, she wants to do the same things that I do. If there was just one thing that I could recommend in terms of trying to turn your offspring in to hunter kids, it would honestly be to just talk about how much hunting and the outdoors mean to you. The big key to that is to start young. Many say that I am starting my daughter a little too young, but here’s the thing. I’m not really introducing her to the sport of hunting. Sure, I call it hunting and I do bring my weapon with me, but in all honesty I don’t expect to harvest a deer when I take a 3 year old out in to the woods with me.

My Hunter Kid has Her First Hunt

After almost 2 years of her asking, I was finally able to get her out to enjoy an evening hunt with me today. We got a late start because her mother doesn’t get home from work until about 4 in the afternoon. I got her all set up in her camo and we headed out. As soon as we got set up at our spot, she was super focused on watching the woods out in front of us. We were sitting on the edge of a suburban lawn. This is at my local funnel property. We sat close to the pond with a NW wind. That wind made our scent blow straight at the barn about 40 yards away so we were good as far as that was concerned. Within about 30 minutes, she turned in to the typical 3 year old and was bored as can be from not seeing anything. She was playing with the camera, picking up leaves and throwing them in the air (after I had taken the time to clear the ground so we weren’t making noise), and in general moving around a lot and asking as many questions as possible. Although to be fair, she really only had one question on her mind and that was “you see anything yet daddy?” She also wanted to pet the deer when they came in. With only about 20 minutes of daylight left she said she wanted to leave. So I got up and got everything all packed and ready to head back to the truck when she says “but daddy, I want to see a deer”. I gave her a quick reply of “then we have to stay until dark so that maybe we can see a deer, but we can leave if you want to too”. She insisted that we stay until dark so she could see a deer. I couldn’t have been more proud as I quickly unpacked everything again and say back down. 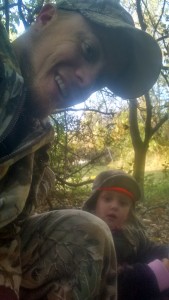 Well, as you can imagine we didn’t see anything. And quite frankly as I stated at the beginning, I didn’t expect to. I can say that she had a ton of fun hunting with her daddy and I could not have had a more successful time out in the woods. Every parent should be lucky enough to experience the joy of having their child with them while on stand. I wouldn’t suggest bringing them to your best spot, but that’s mostly because the point of that hunt is not to harvest an animal. It’s main focus is to enjoy the outdoors with your loved ones. Show the new generation of youngsters what hunting means to you and how they too can experience the peacefulness that comes with spending an afternoon in the stand. Listening to birds chirp as you watch squirrels running around like mad men stocking up food for winter. When you’re lucky enough, you get to watch deer as they pass by without ever knowing you were they, or how close they came to becoming dinner. The next time a youngster, no matter how young, shows interest in hunting it is our duty to take them out and show them what it’s all about. This evening was the by far the best hunt I’ve been on so far this season and quite frankly don’t think that any hunt for the remainder of the season is going to come close to comparing to this evening’s hunt. I’m proud to have a daughter that so far is enjoying the outdoors and on her way to becoming a bowhunter like her father. Happy hunting!