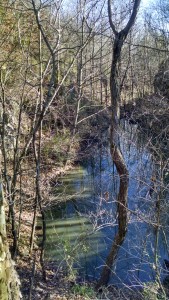 Two weeks ago I was able to get a morning sit at my local funnel spot. I had not been there in a while and was looking to just enjoy a relaxing morning up in the stand. Since my last hunt, I found out that someone got permission to hunt on the neighbors land to the North of me and had put up a single stand. Since I had not been out there, I was not sure where exactly the stand was set up in relation to where I was going to be climbing the tree. If you’ve followed my adventures this season then you already know that I’ve found a ladder stand still on the property and hunted from it when I got my doe. It turns out that it is the same hunter that ended up gaining permission from the neighbor. Anyway, on my trip in to the woods, I discovered that the amount of rain we had been getting had just about completely flooded the entire back half of the property. Coincidentally, the tree that I need to get to in order to use the climber was located within the flooded area. The only thing that saved me (somewhat) was that it was a very cold night morning which froze a layer ice on top of the water. Even still, most places in the ice were not quite thick enough and I ended up sinking a good six inches in to the water on several occasions during the short walk. By the time I was able to get the climber set up and get everything up in the tree, the water had basically soaked through my boots and socks all the way to my feet. When the temperature drops below freezing during the hunting season you tend to get cold feet as it is so I’m sure it comes as no surprise that by the time 9 am rolled around my feet had just about froze solid. The only thing I could do was hang my feet off the side of my stand so that they could be in the sun absorbing those UV rays. To make matters worse, I didn’t see a single deer that morning and once the sun came up I was able to see exactly where the hunter had placed his stand. From where I was, the ladder stand was set up overlooking the same path as I was except they had set up so the path went directly underneath them. Also, they were set up only 20 yards from where the stand had been set up before, just on the neighbors property instead of where I had permission to hunt.

Though my previous hunt could easily qualify as the cold sit, it really only got that way because of being wet. On the real cold sit over this past weekend, my feet both froze solid without ever getting wet. During the Christmas break, I was able get a new video camera that would allow me to get much better video of my hunts. I have been chomping at the bit waiting for an opportunity to get out and use it so as soon as I had the chance I took it. This time, I was not too concerned with breaking through the ice because even if it was still flooded back there, the temperatures had been below freezing for several days straight so I expected pretty solid ice. Luckily for me, the ice was in fact pretty solid and offered a pretty quiet trip to the back of the property. This time I headed out there for an afternoon hunt so that I could see where I needed to walk if there was in fact open water all over the place. As I walked the dirt bike path, I kicked up 3 does that were bedded right off the path on the downwind side of me. I was pretty disappointed because that is the one spot that I can’t get down wind of when entering during a Northerly wind. I was happy that I did not fully spook them in to blowing out of there. Instead, they simple got up and slowly walked away in the direction I had come from as they watched me stand still on the path. Once they were out of sight, I continued on to my tree and got set up. I gotta say, it felt like a great afternoon to see a big buck. There were flurries that would come down every once in a while and everything just felt like it would be an awesome afternoon of hunting. The one thing that bothered me was that I was not seeing any tracks in the normal trails that the deer take past my stand. As the afternoon wore on, I got a text message from my wife telling me that there were 6 deer in the field across the street from our house eating away. That got me even more excited because there was still several hours of daylight left. Within an hour, I saw two year and a half old bucks come through, but never close enough to where I would have had a shot if I wanted one. I did however get to film them as they passed by. I have to say, I’m extremely impressed with the camera that I got. I will be posting a review of it coming up soon so be sure to check back for that. Those two bucks would be all I saw for the rest of the evening. As with the previous hunt, by the time I got down, I could not feel my feet at all. They were just about completely frozen solid. 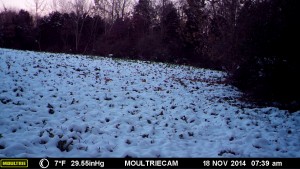 This hunting season has been a total roller coaster for me. The entire early season was plagued with mishaps and very few deer sightings. Then peak rut hits and I finally get a big doe down followed by a very nice mature buck on the very next day of hunting. So far during the late hunting season, I’ve been plagued with very few deer sightings and massive problems keeping my feet warm. The one thing I have going for me right now is that I wont give up. No matter how brutal the weather is, I plan on making at least two more trips out during these last two weeks of the bow hunting season here in Illinois. My goal for the next sit is still to look for a buck depending on the location that I’m hunting. No matter what, during the last sit, I’m going to be looking to harvest a buck, but I’ll take the first confirmed doe that steps out as well. Happy Hunting!