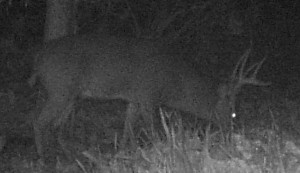 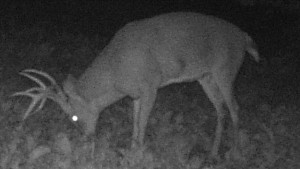 Side by Side Comparison of Tank and Hit Lister. Do you agree that it’s the same buck?

Last year when we were finally able to get the cameras set up and taking pictures I remember being extremely excited for all the different things I could use them for and at the time had no idea that they would eventually be help making the connection between the bucks. Upon arriving for firearms season, we retrieved the cards and started looking at all the pictures. Right away I picked out my favorite buck that we ended up calling Tank. There was no doubt he was the oldest and most dominate buck in the area. For more on Tank, check out 2015 hopeful hit listers.

He really came out of nowhere. We hadn’t gotten a single picture of him all summer or fall up to this point.  That all changed once we showed up for the beginning of the second firearms season in Illinois this past December. As I sat going through the pictures we had gotten since last checking them, I immediately noticed the very nice mature buck. On top of that, we had a daytime photo of him standing less than 20 yards from a stand. For more on this part of the story, check out Deer Hunting – Big Buck Down. It goes in much more detail about the buck and the harvest.

If you look at the two photos at top, you will see two bucks that are definitely mature, but also, they look to be the same deer. The only real difference is the fact that on the left hand side of the deer in the picture on the right is a sack filled with puss. I can only assume it’s from someone making a bad shot on him at some point in the season prior to our getting any photos of him. Because of that injury, I expect that Tank’s antlers took a hit and did not increase in size even though they most likely should have. That being said, I don’t think his antlers this year are much smaller if they are smaller at all. Anyway, The first thing I noticed was the mass. Next, the curve of the main beams and finally, a scar that shows up on the left hand side of him just above his shoulder. Once I saw that, I knew I had the same buck. I am astonished that Hit Lister turned out to be Tank and I can not wait to see what nice buck takes his place. Happy Hunting!