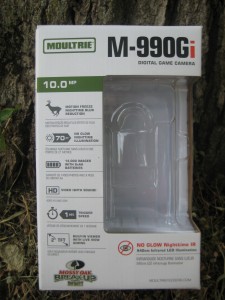 I need a trail camera

When I first started hunting, the Moultrie game camera didn’t exist. In fact, trail camera’s were just starting to be made available. This was back in the day when we had to use old school film and have it developed before you could see if you got any good pictures. Sometimes, we didn’t even get any pictures of animals. So fast forward to 2013, we had a trail leading in to our field that was a clear dirt path about 6 inches wide. We knew that there was significant traffic on the trail but had no idea what was using it. We set up a stand within 20 yards along the edge of the field and proceeded to hunt it without much success. In the summer of 2014, I couldn’t shake the nagging feeling of wanting to know what was using that trail. I also was beginning to take a massive interest in targeting only mature bucks, so I needed to know where to find them.

I must admit, prior to getting the M-990Gi, I did not have any clue about what to do with a game camera. I only knew that I wanted to get some good pictures of deer to get a better idea of what our area had to offer. I left the decision of which camera to get in the hands of my father and he came back with two of these Moultries. Not knowing what the price was, I figured that they had to be pretty decent because my dad never buys anything without at least 5 personal recommendations from friends. So I set it up in my backyard watching some chestnut trees to see what came in. 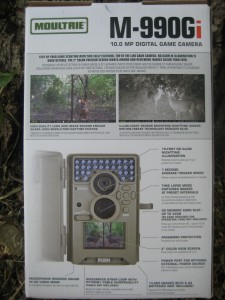 The Moultrie M-990Gi game camera has been nothing but awesome. Of the two that we purchased, one of them ran through a set of batteries in 2 days and took 13,000 photos of absolutely nothing. The set up was okay (meaning nothing was in the way triggering the camera), but yet there was not a single picture of anything but blurred trees. With the camera not running correctly, we took it back and got a new one with zero issues. The replacement camera has been running like a champ since. The other camera we purchased at first has done nothing but surpass my expectations. The pictures are crystal clear and the video is awesome. The cameras have been out in the woods since being tested in the backyard, and have never failed. Surviving a Northern Illinois winter while taking pictures and not draining the batteries completely is no easy feat. I am still on the original set of batteries in both cameras and have gotten a minimum of 20,000 photos from each so far. Both also show that the estimated battery life is at 99%. Either these cameras are extremely efficient or I’m going to be in for a rude awakening one day when I go to check them.

Though I did have an issue with one of the cameras at the beginning, the problem was remedied without incident and have not had a single issue since. As I already stated, the Moultrie game camera chosen for use on our hunting property has completely exceeded my expectations. Though they are a little pricey for the budget minded person like myself, I would buy another in a heartbeat, and plan on doing so by the end of this season. Check out the price from Gander Mountain Here.