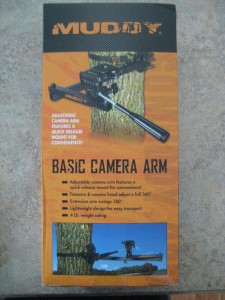 When the season started back in October, I knew that I wanted to start filming my hunts. More than that, I was determined to get a kill shot on camera during my first year filming my hunts. The biggest problem that I had (of many) was that I didn’t have any way of holding the camera (which I also didn’t really have) up in the tree. Like many, I had heard of the muddy camera arm but had never even bothered to see the cost of one and didn’t want to spend money on something if I wasn’t sure that I’d enjoy the added difficulty of self filming my hunts. So, with that in mind I began a household search to find some way of holding up the Canon Powershot as it filmed while I took the shot. After a little bit I remembered that I had an old tripod laying around that was meant for using on a table top. I got it out and decided that it was going to be my best option for the time being until I could get something a little easier to deal with up in a tree. With the tripod, I have two options. First, use it like a tripod (which doesn’t work at all unless you’re in a ground blind or an elevated platform type stand) or second, somehow attach the tripod to the tree or my stand using a bungee cord. Though neither of these methods have proven to be very convenient, anything that was going to hold the camera for me while I took the shot was going to be better than nothing.

So far I have been able to use the muddy camera on a few different hunts. On those hunts, the camera arm has performed pretty much as expected. The ratchet system makes it easy to set up and the arm itself is solid. Moving the arm is quiet which is obviously very beneficial when hunting. The biggest and really only complaint that I have with the muddy camera arm is that the ratchet itself is thin and cheap. Though I realize that the it’s supposed to be a very light duty ratchet, it would have been nice to see one that was a little more solid. If I wanted to, I could rip the thing apart with my bare hands and I’m not the strongest person in the world by any means. Though the ratchet is thin and seems really cheap, I did not break it when I had to put a lot of force on it to release the strap when I was packing up on the first hunt using the arm.  I made a mistake in the way I put the strap through it which kept pulling the strap tighter when I was trying to release it. If you have ever done that, then you know the type of force I had to use to get that strap loose. 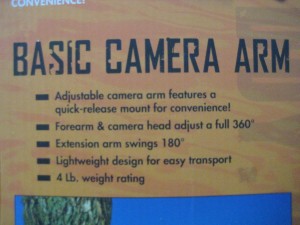 Bottom line, the muddy camera arm is absolutely worth the relatively cheap price. Compared to how I was holding the camera before, it’s a night and day difference. The mobility of the arm while in the tree is great. When all the way extended, the camera arm is just long enough to wrap around me to film a deer on the opposite side of the tree as the arm yet short enough to maneuver it in between me and the tree for the shot as well. I’m looking forward to next season when I can really put this camera arm to use. If you are new to filming your hunts, or simply looking for a (relatively) cheap camera arm then pick one of these up from Amazon for next season. Happy Hunting!