It’s been a while since I was in the market for a new archery target and I’ll tell you the reason why in just a little bit, but I want to share how I came to check out what Rinehart targets had to offer. I had just decided to pick my bow back up after years of it sitting around taking up space unused. Because of how long it had been since I shot the bow, I no longer had anything that could pass for a target so I began looking around to see what was out there. This would be the first target I ever bought. Since I was made of money (I’m still not by the way), I was looking for something that wouldn’t break the bank, but also would withstand a major punishment as I planned on shooting quite a bit. After going to my local sporting goods store, I saw several different options but couldn’t come to a decision on any so I left empty handed. Honestly, I wish I could say that there was some magical moment where I was impressed by some ad or something that made me look at Rinehart Targets. the honest truth of it though is that this one at the time was on sale and seemed pretty solid, so I went for it.

I truely couldn’t be more impressed and surprised by Rinehart targets’ Rhinoblock. I have now put thousands of shots through it and I am just now getting to the point where I can’t shoot for the center circle because my arrow will bury in to the vanes. I am however still able to aim for any other spot within the removable and replaceable core without any issues. i have had the target for over three years and have put shots in to every single side of the target, at quite a few different angles as well. I have no doubt that if I did not have to take so many shots while tuning in my bow this past summer that this target would have lasted another couple years easy before I had to replace the core. As it sits, I will likely replace the core by the end of next summer, especially if I’m out there every day like I was this past summer all the way up through opening day. Since then I’ve been unable to make it out to shoot every single day, but I’m still getting plenty of practice in. 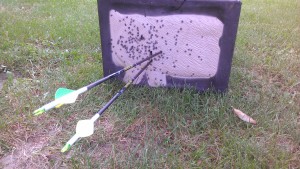 Hands down best bet for the money. Like I said, I’ve had the same target core for three years not and I’m just not starting to contemplate replacing the core. If you’re looking for an archery target that can take a ton of abuse and still look pretty, then look no further than Rinehart Targets’ Rhinoblock. With the replaceable core, you will never have to settle for a cheap bag target again. You can find the replacement cores at Amazon.com as well as the entire target if you need it. I am looking forward to putting a few thousand rounds through the next core as well! Happy Hunting!