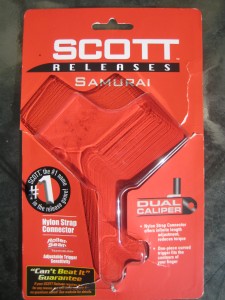 “Check out the Scott Samurai”

This summer I was finally able to get a few more archery products to get my wife set up and ready for the season. While meandering around the archery talk group on facebook, I got it to a conversation with a gentleman that recommended I try the Samurai release by Scott Archery. The conversation came about because a brand new hunter was asking about releases and so I shared my review of the Tru-fire Patriot release. Anyway, I was told that my groups would immediately shrink if I switched. I honestly didn’t believe them, but decided that it was worth a try since I needed to get a release for my wife anyway. So I bit the bullet and picked one up during the next trip to my local Gander Mountain.

After taking it out of the package and looking it over, I noticed a few obvious differences from my old release. First off, this release utilizes a strap to adjust the length and fit to your hand, offering complete control over where in your hand that release trigger is. Secondly, the trigger on this release is extremely sensitive. I have definitely accidentally let a couple arrows go before I was ready. Because of that, I have had to change my pre-shot routine slightly to accommodate that. That being said, I actually like that it’s a hair trigger. Once getting used to it, I have found that it has helped remind me to have a gentle pull on the trigger rather than a quick jerk. the Scott Archery Samurai that I purchased attaches to me using a belt buckle style strap, making it extremely quiet compared to the Velcro strap on my last release. 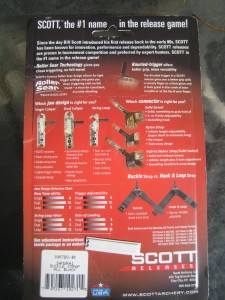 As with any new piece of equipment, the Scott Archery Samurai release took a little getting used to. Once I was comfortable with it, I found that my groups recovered back to how they were with my previous release. To me, this proves a couple things. First off, the equipment that you chose to use needs to be comfortable for you or you’ll never have good groups. And Second, Using a piece of equipment that is 3 times more expensive than something else does not mean that you will be that much better. It all boils down to you. The more you practice and the more comfortable and confident you are, the better you’ll get no matter what equipment you have. In the end, I would definitely recommend this release to someone looking for one because it has proven to be a slight step up from my previous one. I say a step up only because of the infinite adjust-ability and quietness of the wrist strap which offers a greater chance of fitting the release to my hand while the only downside I can see is that you do not have the ability on the wrist strap to fit any wrist. Some people may find that they are in between two settings on the buckle, just like with a belt. For me, it works and I’ll be using the Scott Archery samurai this fall in my treestand. This release can be found at Gander Mountain or Amazon.com. Happy hunting! 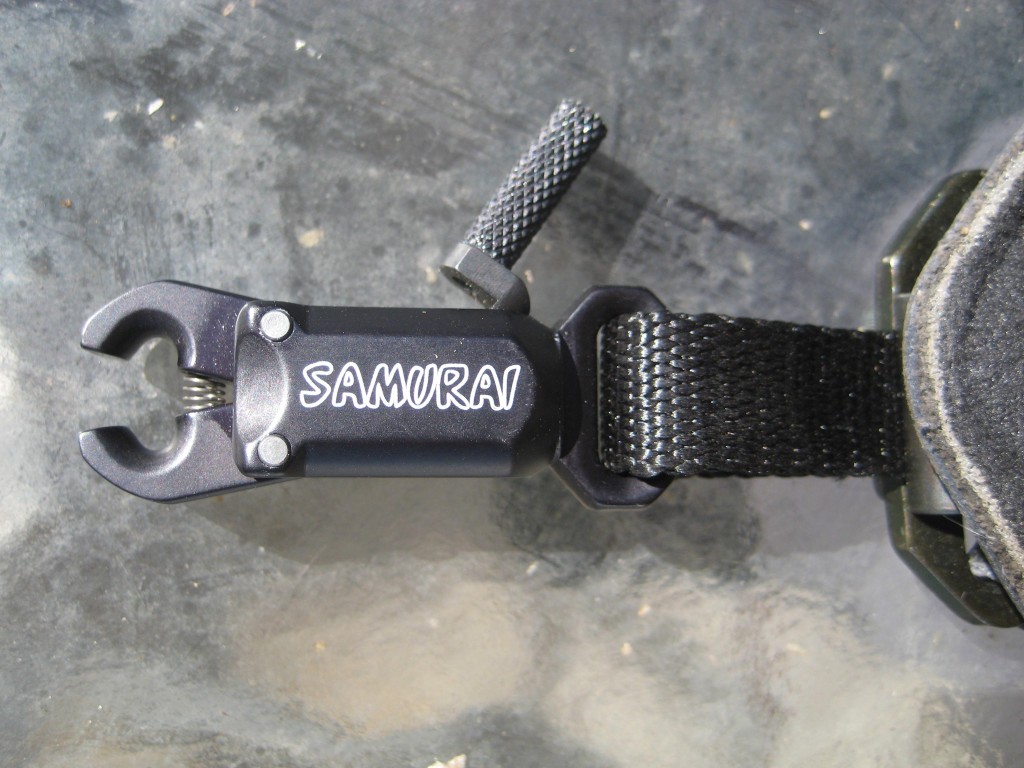