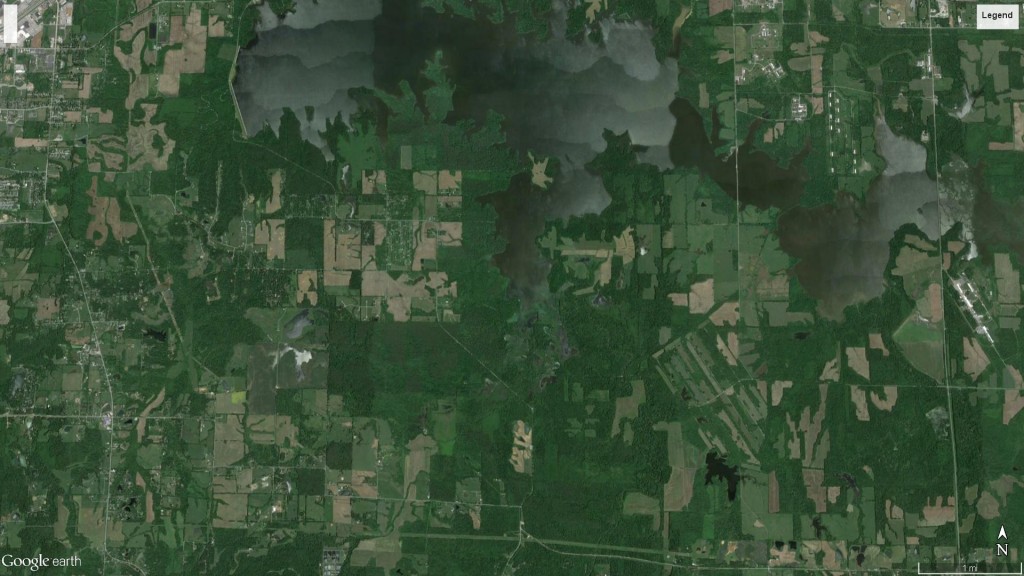 Why Use Aerial Maps?

These days, many hunters do not have the luxury of scouting for deer on pieces of land by foot for one reason or another. Maybe you can but don’t have much time and need to make the trip as productive as possible. Whatever your reason may be, using aerial maps can dramatically decrease the amount of time you need to spend with boots on the ground scouting for deer. By using aerial maps, you will be able to key in on the best areas that are most likely to produce good stand sites. Think of it this way; looking at an aerial is like looking at a road map, but for deer. Using the map, even a complete beginner can identify things like funnels and water sources. With a little practice you can also identify likely bedding and/or feeding areas depending on where you hunt. 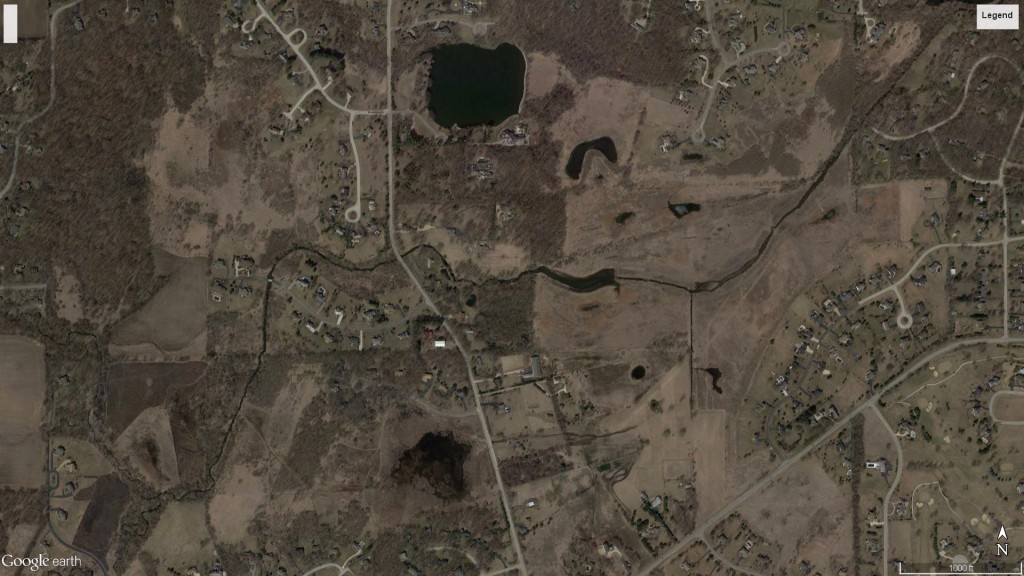 The thing that is usually pretty easy to identify with an aerial map is funnels. Funnels are a huge help to deer hunters in that a funnel will pinch deer down in a certain area which allows you to take advantage of their preference for traveling through cover rather than out in the open. In the center of the photo above, I found a funnel that I hunted last year in a suburban area. This funnel produced so much deer traffic that it was tough to decide when head in to the stand. Deer are constantly using that funnel to go back and forth between two very good bedding and feeding areas. An average sit on this funnel would produce 21 deer sightings. Below, you’ll find the a much closer view of the funnel with the preferred stand location. I was not able to put a stand here because I could not get permission from the owner, but I had a great view of just how good the spot could have been. Instead, I was able to hunt a couple existing stands set up on the neighboring property which still allowed me to mostly take advantage of the funnel. 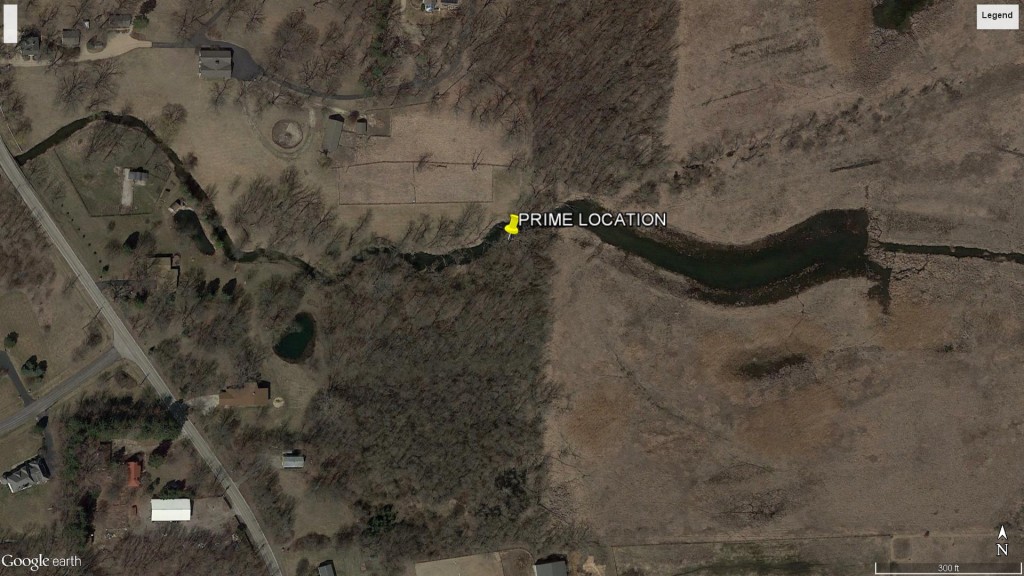 Not only does this this area provide a funnel, but there is also the added benefit of the creek to help make the funnel that much better. The easiest place to cross that creek is actually right where the woods meet smack dab in the skinniest portion of the funnel. If you count, there are 5 different lines of cover change that all meet right there. Along the road cutting through the East side of the photo are Pear trees and the neighbor that owns the land the actual funnel is on also puts out things to feed the birds that the deer can’t get enough of. In this one little area the deer have food, water, and bedding. Finding areas like this are not all that difficult and the only thing that I would have to walk the area for is the Pear trees. Every other bit of information was recovered using aerial photos.

This area is not quite as easy, but still not difficult to figure out. Often, deer are going to bed in thicker areas, especially during the winter. One way to pick out where deer will likely bed is to look at previous aerial photos of the area in winter to identify the pine thickets. In the photo below, I’ve done just that. It’s a winter photo of an area that has a couple different pine thickets. After identifying them on the aerial photo, I was able to walk them and confirm that deer do in fact bed in those areas and they are super thick. 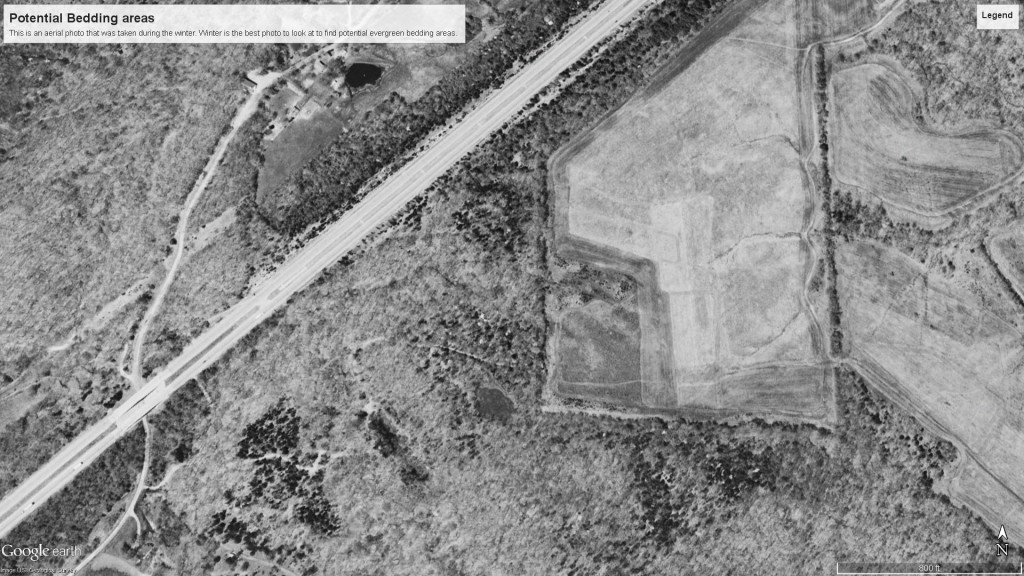 This photo was taken quite a few years ago, but it’s the last winter photo taken for me to be able to see these areas. I also used winter photos to make it easier to see the funnel and the creek in the previous example. To know that there were bedding areas around the funnel, I used a summer photo confirm that the area off to the right of the funnel is a CRP field, providing a great bedding area. There is also a slew on the other side of the road that provides great bedding opportunities.

By using a combination of summer and winter aerial photos of the areas I will be hunting, I am able to get a great idea of what that property can provide in terms of hunting opportunity without ever having to step foot on the land. I was able to identify a major funnel and bedding on one piece of land and identify a few different bedding areas on another property. This information is extremely valuable because I now know what areas to try and avoid on my scouting mission if I don’t want to disturb the deer and identify areas that I need to go in and take a closer look at to confirm suspicions. If you don’t have the time to do some boots on the ground scouting, looking at aerial maps of the area can provide a great opportunity to pick a spot blind. This can be especially useful if you are going to hunt an area out of state or far away and wont be able to scout prior to being there to hunt. The next time you are planning a trip to go out scouting for deer, try taking a look at an aerial photo or two before heading out. It just might save you some time.