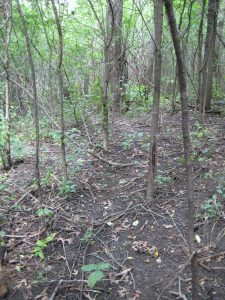 My wife and I were finally able to get out a couple of weeks ago to check out our public land hunting spot. I have to say, scouting my public land spot was a lot of fun. That being said, I can’t remember the last time I was covered in so many burrs. In fact, it was so bad that we elected to drive home practically naked. We didn’t want to get the inside of our truck full of burrs as well.

Though I knew in early August what preserve we would be getting to hunt, it wasn’t until the last few days of August that I found out the exact specific area within the preserve. On top of that, we weren’t allowed to head in to our parking areas until September 1st. Anyhow, we had a very enjoyable afternoon walking the area and confirming a few of my suspicions from my aerial scouting. On top of that, we were also able to learn a few things that I wasn’t able to see from the aerial view.

I am happy to report that I was able to confirm a few things. Looking over the aerial map can be an awesome tool if you know what to look for. First off, I confirmed that both of the fields within our zone are unharvested hay. This means that I can expect that at least some deer will be bedding in those areas. That’s going  to make hunting this area very difficult. I’m honestly not worried about our scent once we get in the trees that we picked.  If we follow our plan for wind direction entry to our stands, then we should be just fine.

Next, we were able to confirm that there are indeed some oak trees concentrated along a short ridge within the timber. That ridge extends out in to the hay field with a couple more Oak trees as well. Since I can’t hunt the are until mid November, I’m not sure that there will be many acorns left. But it’s still good to know.

While walking the land, we were also able to gain some very valuable information that I was unable to see from the aerial view. smack dab in the middle of my zone lies a fence. Roughly 4 1/2 tall and extends the entire through the entire zone in a North/South direction. This is actually both good and bad. Good because there are exactly 3 spots where the deer cross over the fence. One of which is an actual opening in the fence along the the ridge line. If you ask me, an absolutely obvious stand location. It will be a tricky entry and exit, but bullet proof for an after daybreak entry on any Northerly wind direction. In fact, it could even work with a straight East wind if need be.

Multiple trails led in and out of that opening in the fence. To be fair, I have to say that the other two crossings also have quite a few trails leading up to them. Those trails were meeting up with a main trail that led to the opening. With my access to the land not being until November 14th I will be focusing the “early” hunting to possible cruising locations. That ridge will definitely be a cruising location for bucks. They can scent check all the bottoms as the thermals bring the scent up the hill. Not to mention the long distance scent checking from the direction the wind is coming from.

I also learned that the deer walk along the fence that borders the interstate highway. I have to admit that I wasn’t expecting that. Deer normally use their eats quite a bit to defend against danger. When they walk along the fence they aren’t able to use it. I was really hoping that we could use the highway to our advantage. It would have been perfect for entry and exit routes. We may still use it in one instance. Even with the deer trails, the highway will still mask our sound as we walk in. So long as we are on top of our scent control, we should be in good shape.

Finally, one of the first things we found when we began our walk was an apple tree that was already dropping apples like crazy. Not something that helps us this year, but definitely something to keep in mind for future years. You never know, I could end up with the first season in the same zone next year.

I learned so much about the deer in a very short amount of time. We were able to pick out four or five different locations for stands with multiple trees in each location depending on the wind. We had a great afternoon getting to know a new piece of land while also allowing our dog to get some much needed exercise. No matter what, I know I have three different fence crossings to hunt during the rut. I’m ready for the season to start. T-minus 6 days until the Illinois archery opener. Happy Hunting to all those already hitting the woods!