The following is part of my self filming learning curve. You will see all of the video that I was able to get during my hunting trip this weekend. To start with, I say the wrong date (and never noticed in time). I actually left on Thursday October 8, not the 7th. The heading reads “almost” because I had some bad language in one take, so the video is the two other takes. Takes were done all in a row and it’s the first take that I’ve cut out. Please enjoy.

My Self Filming Learning Curve

This weekend I had many struggles with the camera. The first was realizing that I had forgotten the charger for the camera. So, the above video shows all the video I was able to capture (minus the bad language take). After these clips, I was able to turn the camera on for my first days hunts. The weather front ended up being a day later than I expected and so the first day was actually full of rain and not very much deer movement. I did see a single spike buck that passed through at 10 yards, but elected to pass and he was there and gone before I could get the camera on him. My second major blunder came on Saturday morning. I had really high hopes for that morning because the front had moved through and we were going to be hitting peak high pressure right around daylight. Just as it started to get light, I had two deer approach from behind me and to the right. Exactly where I expected them to come from which was also up wind. Anyway, as soon as I was able to react to the deer and turn on the camera (I had only been in stand for a few minutes as I was running a little late). Well, as you would probably guess with me using a cheap point and shoot camera, the noise of it turning on spooked the living daylights out of the two deer and off they went. Luckily for me, they only dashed off 20 yards farther into the timber. I proceeded to blow back at them (pretending like somehow a deer could have possibly made the sound that scared them). We sat there exchanging blows for about 5 minutes before they quietly walked off. They were the only deer I saw that morning. As an added bonus, the camera shut off on my during the blowing conversation with the deer because it completely ran out of batteries at that point. What an awesome added bonus!! Man, I was pretty deflated at that point. 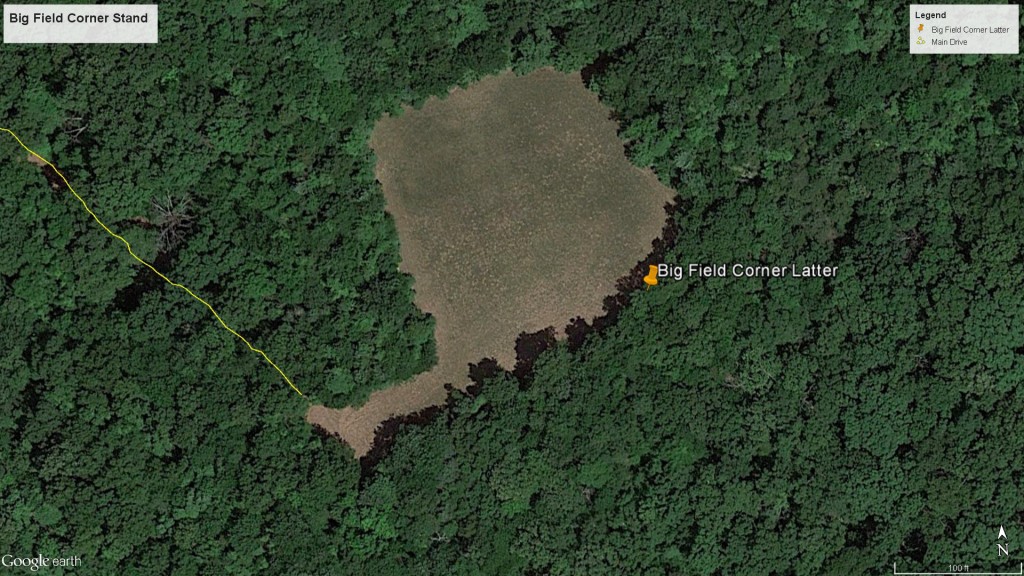 Even with all my mishaps, I still had an awesome time and what I would consider a successful trip. I had a clear shot at a deer in range that I elected to pass on. As a bow hunter,  you can’t ask for much more than that. During the trip I was able to get encounters with 3 animals that I have never encountered while in the stand. First, rabbits. In fact, this was the first time I’ve ever seen them on the property. I’ll take it as a good sign. Second, a Woodchuck. Again, never even seen one on the property, but got to watch one all day Saturday from the stand as it out of our food plot. And the third and final brand new encounter while on stand was a skunk. Unlike the other two, I actually have seen a few skunks over the years at various times while on the property, but never while actually on stand. Along with all the new encounters, I had a fun scene play out in front of me as I watched 3 turkeys come in to the food plot I was sitting on. Upon entering, the leader of the group immediately noticed goofy rack 7 (a buck I’ve been watching on the property, great potential) carelessly eating away in the field. He did not like that one bit! The turkey yelled at the deer for about30 seconds before ushering the other two turkeys back out of the field the way they had come. It was quite entertaining, especially because Goofy Rack never paid any attention to them other than to notice they had begun occupying the same food location as him. All in all, it was a great weekend at the property even though I did not release my arrow at a deer.

I still have a very long way when it comes to the self filming learning curve. I learned some very valuable lessons that I hopefully never have to learn again (but most likely will). Regardless, I had a great trip and look forward to the next one in about a month from now. I’ll be watching the weather closely looking for another big front. Happy Hunting!