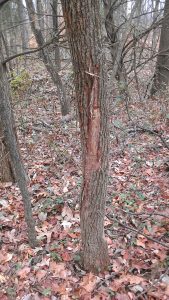 I have to say that I am VERY lucky. My 5 year daughter has so far shown a tremendous amount of interest in deer hunting. She’s young enough that she still relies on me to know when it’s time to do different things, but she’s learning. This year, I started mentioning shed hunting around the middle of January. I knew it was still a bit early, but wanted to see if there was going to be as much interest as there was the previous year. Of coarse, she didn’t disappoint. Right away she asked when we would be going on our first shed hunt of the season.

I’ll quickly let the cat out of the bag. We didn’t find any sheds. We had a great time and got a really nice long walk in. I was able to find an area to focus on next season (for sheds, it’s public land that is not able to be hunted on). While walking, we found a well used single bed with some deer hair on it. Surrounding that area was a whole bunch of rubs. The area was thick and most likely rarely sees any foot traffic from humans. There were a few different trails leading in to the bed. Needless to say, I’m excited to see that area again next year.

My daughter also found a full on deer skeleton. The deer was located within 20 yards of what is becoming a major road. I’d venture a guess that is the most likely cause of death. I wasn’t able to figure out if it was a buck or a doe because the skull was missing. The fact that the head was missing is an indication that it was probably a buck though. Not too many people are taking doe heads home that I know of. Those were the only two highlights from the walk that lasted roughly 2 and a half hours.

Having trouble finding sheds? Get some tips to help you find more sheds as well as feel a little better about not finding sheds by reading these articles: Bad Shed Hunting, When Do Deer Shed Their Antlers?, How Weather Affects Shed Hunting, Urban Shed Hunting – High Competition, High Reward

Video from the Shed Hunt

Here is the little bit of video I took during the shed hunt.

We were unsuccessful in our shed hunt. Even still,  we had some awesome father daughter time. Getting to spend time with my kids while also doing an activity that I love it something I will never take for granted. I’ve explained in another article that it’s not always important to find shed antlers where you hunt. Not just for the reasons mentioned there. More so for the memories created each time I’m out in the woods. Unfortunately, this was the only shed hunt I was able to get out on this season. I will be looking for better luck next year. At the very least, I’ll be getting out there more than once next year. I hope you all had a great shed hunting season! If so, please let me know, I would love to see some photos of your harvests. Happy Hunting!