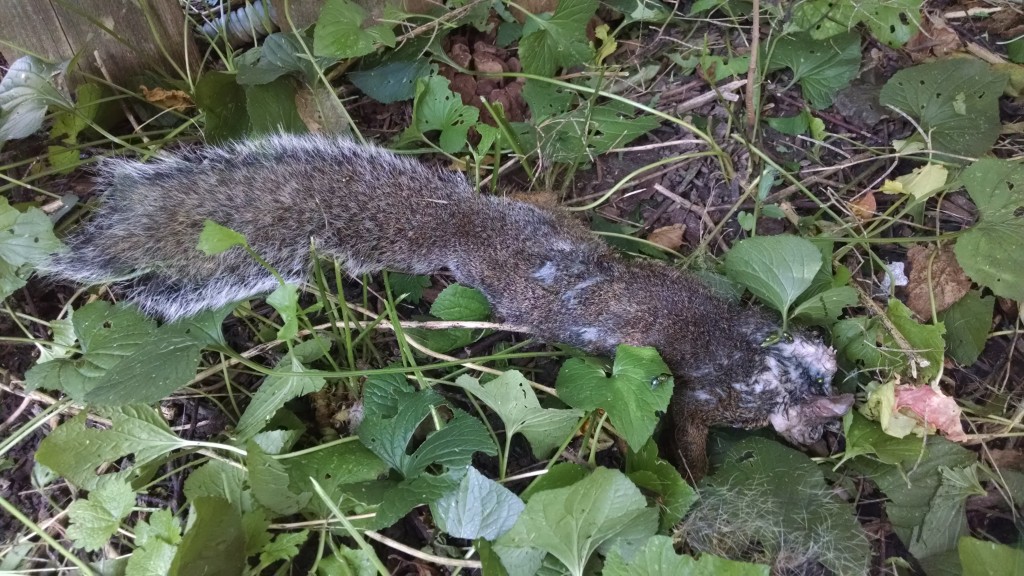 Well, a couple days ago a shared my good news about getting my local hunting land back and said that I had some more good news to share. That good news turned in to somewhat sad news unfortunately. Every day since my chestnut trees starting dropping nuts I’ve been in a constant battle to get out there and collect them before the squirrels and chipmunks do. Since I’m always out there practicing my bow, I’ve often wondered if I could sneak in under 20 yards of them and get a shot off. A few days ago I was heading out the back door to unload some mulch from my truck when I noticed a squirrel going to town on my nuts and again began my stalk (at this point, I’ve tried about 15 times to stalk in and hit one). As I came around the pine trees that I use to hide my approach, I saw the squirrel was still sitting in the same spot that he was when I last saw him. I drew back and took the last step out from the tree and exposed myself as I settled the pin. After I released the arrow, I saw the squirrel jump and flap around in the air. That is not something that I had seen happen while using my bow to go squirrel hunting. I had hit it!! I watched as the squirrel took off with my arrow buried up to the vanes. He ran to the back corner of the yard where we have very thick underbrush and disappeared. 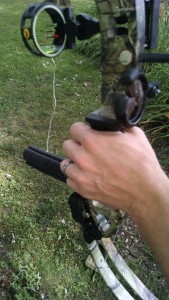 As soon as I shot, I heard my wife go “Oh my god, did you get it?”. She has seen me do my stalk on the squirrels a number of times without being successful, so she was in shock that I had finally done it. She left dropped the kids off to me and immediately took up the trail. As she neared the back corner of the yard, I heard the neighbor on the other side of the fence in back talking. Amy (my wife) also heard the neighbor and after peaking her head through some of the brush and seeing the squirrel along that back fence start trying to get over to the  neighbors side, she decided to back off. The last thing we need is for a squirrel with an arrow sticking out of it to make it across the fence in to the neighbors yard. We already what I would call a rocky relationship with them. At that time, my arrow had come half way out and now had an equal amount of arrow shaft sticking out of each side. Needless to say, I thought we would be safe in letting it die before heading back in to avoid having to deal with the neighbor.

Though I am extremely happy about finally getting a squirrel with my bow after taking about 15 shots, I am saddened to say that it took me a little over 2 days to actually find it. Because of that, I am not going to be able to eat the meat which my wife was very much excited to try. I know that most people don’t eat squirrels, but I’m a firm believer in eating (or giving away for someone else to eat) anything that you kill. Even though the recovery has put a little damper on this exciting event, I am very much looking forward to getting back in the saddle for the next one. By doing this squirrel hunting, I am doing a couple things that will help my whitetail hunting starting October 1st. First, I am getting practice shooting at live game. Though it’s just a squirrel, it has the ability to move just like any other animal, forcing my to focus on the animal as well as taking aim. Second, squirrels are small! By squirrel hunting, I’m practicing  aiming small to miss small. Each and every shot I took to get my first squirrel would have been more than sufficient to hit the vitals on a whitetail. I can’t tell you how much confidence has been gained from this small successful hunt. It’s also the first kill that I have gotten with my Bear outbreak. Happy Hunting!