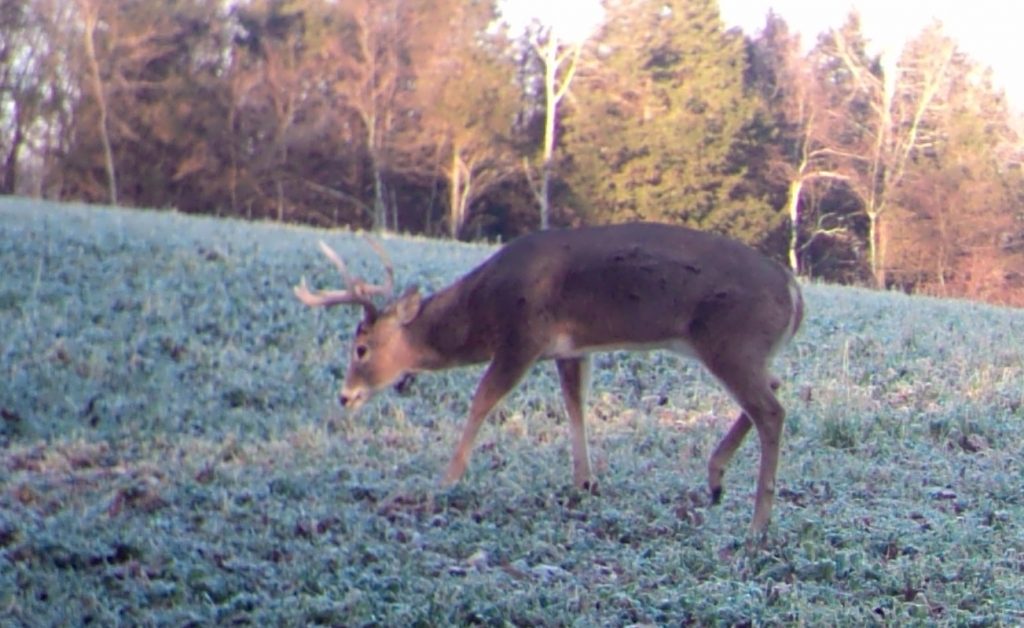 We’ve all got one

That deer that got away. Maybe it was a button buck that you made a bad shot on. Maybe it was a mature doe that somehow managed to dodge your arrow on a perfect shot. For me, it was a mature buck that I didn’t have the knowledge or patience to wait long enough before taking up the blood trail. The story of the one that got away can take many forms and means different things to different people. For some, the one that got away could be a deer that they’ve never even seen while sitting in a stand. For some people, this phrase has relationship implications but any time that this phrase is brought up around me, the story of this buck immediately comes to mind. I tell myself it’s a deer hunter thing; maybe you agree.

The One That Got Away

It was October 2009. Rain pounded the wind shield for the entire 6 hour drive to the family farm in Southern Illinois. As we drove, my wife Amy and I just hoped that the front would be through by morning so we didn’t have to endure a soaking wet morning sit on our first hunt of the season together. We had practiced hard all summer long and thought we were as prepared as we could possibly be. We had a shooting limit of 20 yards or less and were just happy to finally be hitting the woods after a long off season.

I can remember waking up and checking the weather as I smoked my morning cigarette under clear skies. A million stars shined brightly above me as I soaked in the smell of the woods in the morning for the first time that fall. It’s a smell that I look forward to every year. After seeing that the front had indeed move on, I put away my phone to enjoy the darkness under the stars for a few minutes and discussing where we were going to sit for the morning hunt.  At the time, I had not yet learned about playing the wind or following cold fronts. In fact, at that time I hadn’t even heard of scent control beyond walking in a bunch of horse poop at the bottom of the hill to try and mask our boot smell as we walked in.

As the sun began to rise above the tree tops on the horizon, the temps were below average for the area to say the least. With each breath I took, a huge vapor cloud blew in to the air around me. As I looked over towards where my wife sat, I was able to see that she too was emitting clouds with every breath and began to wonder if that was something that would bust us if we did happen to see a deer. It wasn’t very long before I would get my answer.

At 7:30 am, I heard a deer trotting along a trail about 10 yards in to the woods from the field edge that I was sitting on. Before I knew it, the deer was at the edge of the field peering out to search for danger. I immediately began to stand up and turn to ready myself for a shot. The deer stood on a trail that entered the field only 10 yards to my right (at the time, I did not know that the trail was primarily a buck trail that followed was sandwiched between the ridge and the field edge prior to turning and entering the field). Unfortunately, I was only half way turned around when the mature buck stepped out and offered a perfect 10 yard broadside shot. In fact, he stopped dead in his tracks and stared right up at me after stepping out. I can only presume that he knew the stand was a source of danger and had made it a habit to look up there any time he entered the field even though he had just cruised in from the down wind side and did not smell any danger.

After what seemed like an hour long stare down, the buck buck finally decided that he was satisfied the tree was empty and began walking and feeding out in to the field. As he walked, I continued to slowing turn to get a shot at him. Though I had more than enough time to check him out as he stared my down, I had only looked at his rack long enough to decide it was the biggest one I’d ever had a chance to shoot at.

As the buck stopped and dropped his head to again start munching on some food from the plot, I drew my bow back and settled my 20 yard pin at center mass just behind the front shoulder. I took one last breath to calm myself and released the arrow. Time seemed to slow to a crawl as I watched the arrow head straight towards the deer before hearing the unmistakable sound of the arrow hitting hide and disappeared near the bottom of the deer’s chest. I watched as the big buck mule kicked and headed for the far corner of the field before crashing through the brush and disappearing from view. 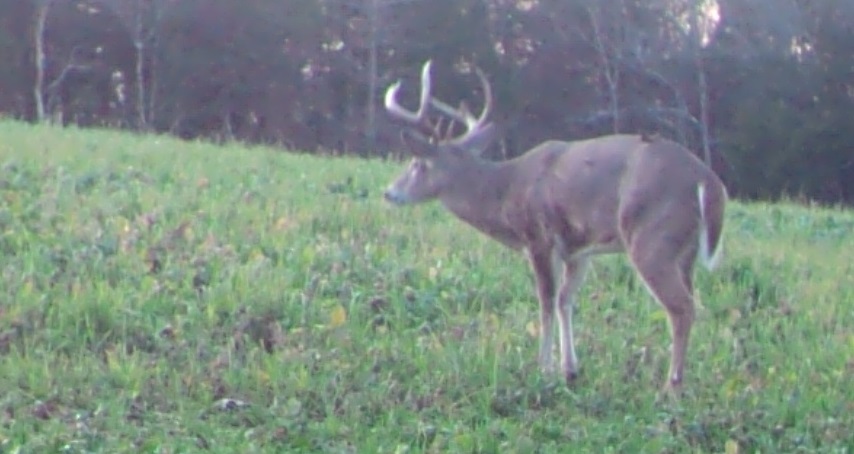 To say I was excited would be a huge understatement. I was so confident in my shot that I just knew that deer was laying just inside the wood line, dead as a door nail. My phone began vibrating as my wife started asking questions. As it turns out, she had no idea that the buck had even entered the field until she heard the string from my bow when I shot. She turned and looked just in time to see the buck jump the brush pile and disappear into the woods.

After waiting only 5 minutes, I climbed down to look for my arrow and get a sense of the hit. To my delight, the arrow was completely covered in blood and there was a significant amount of blood at the impact sight along with white hair. At the time, I didn’t think much of the fact that the hair was white or that the blood was dark. Instead, I raised both my hands in victory and headed back to my stand to give it some more time. After all, it was only 7:40 and the morning was perfect. We decided to hang in the stands for a little while since I was so confident in my shot.

By 8 am, my wife was ready to hit the trail and get my buck. Part of that was the amount of work we had ahead of us to gut and drag the deer, but I’m sure that another part of that was the fact that I couldn’t stop texting her. I was just too excited! We got down and even though I had seen exactly where the buck jumped in to the brush, we followed the blood trail from the point of impact. The trail was extremely easy to follow and before we knew it, we were in the woods easily walking the trail. After about a 100 yard track, we found a spot that was covered in blood. We could tell that the deer had laid down there. To be honest, I was surprised that the deer wasn’t laying right there dead. Knowing what I know now, that bed is exactly where I would have found the deer had I practiced patience and good blood trailing techniques.

From the spot where the buck laid down, we were able to track him another 200 yards before the trail dried up on a neighbors property. I completed grid searches for another 100 yards all around where I found last blood until a thunder storm rolled in and forced me to call it quits after 4 hours of hands and knees searching.

I can still remember that story with extreme vivid detail. It pains me more now than it did when it happened knowing that I am potentially a big part in why I wasn’t able to recover that mature buck. Since I never laid my hands on it and that was before we owned any trail cameras, I have no idea if that buck did in fact survive that show or if he was dead somewhere. It was losing that buck that made me start looking for tips on when to pick up the blood trail. and it wasn’t until then that I learned that an hour would be the minimum you want to wait unless the deer goes down within sight. The second lesson I learned was regarding knowing your yardage. I shot at the buck as though he was within 20 yards. Unfortunately, the buck was actually standing at 30 yards. I was able to confirm it using a borrowed range finder during the next trip down to the property.

Since then, I’ve definitely made more mistakes, but I have not made either of the mistakes from above. With each shot, I become a better bow hunter. With each shot, I gain more knowledge and experience in what happens after the shot. Though you can never discount the importance of the steps that need to be taken leading up to the shot, the decisions that come after shot like when to pick up the blood trail are extremely critical in the ultimate success of the hunt. One wrong move can push a deer miles away where you are extremely unlikely to ever find it.