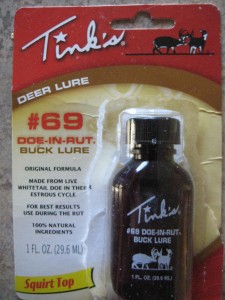 I first off want to start by saying that I normally never use scents or lures. Personally, I prefer to leave as little trace of anything being different as possible. That being said, when I signed up for a year’s subscription to Midwest Outdoors, I received a free bottle of the Tinks 69 Doe in Rut lure. Even though I had never tried lure before and didn’t really have high hopes for it’s effectiveness, I’m not one to waste something, even if I get it for free.

I have a stand that I use with a southerly wind. The only bad part about the stand is that if the wind shifts on me, my scent blows directly in to a doe bedding area. I thought that this would be the perfect spot to try out the Tinks 69 in a few scrapes that surrounded the stand. It didn’t look like the scrapes had been hit in the last 24 hours but I knew that would be the best spot to use it. As usual, the wind did in fact become inconsistent and oftentimes blew my wind (along with the Tinks 69 scent) right along the wood line along a doe bedding area. With it being a early/mid November hunt, I figured any buck cruising down wind of the doe bedding area would get a whiff of the Tinks 69 and come in to investigate. 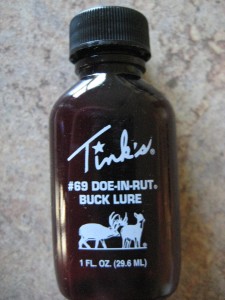 Honestly, I hope that not all deer scents are like the Tinks 69 that I received. During that most of the day rut hunt, I had several bucks that were directly down wind of the scent and not one of them paid any attention to it. The bucks ranged from a button buck fawn up to a 3 1/2 year old buck. Again, not a single one of the bucks came over to check out the scent even though at least 3 of the bucks came within bow range of my stand. All of which also walked down wind of the scent. With this type of outcome, I could never in good conscious recommend using the Tinks 69 Doe in Rut lure. I even came back the next morning to see if maybe a buck had come to visit under the cover of darkness and not a single one of the scrapes had been touched. For me, this was just further proof as to why I don’t waste my money on scents and lures.