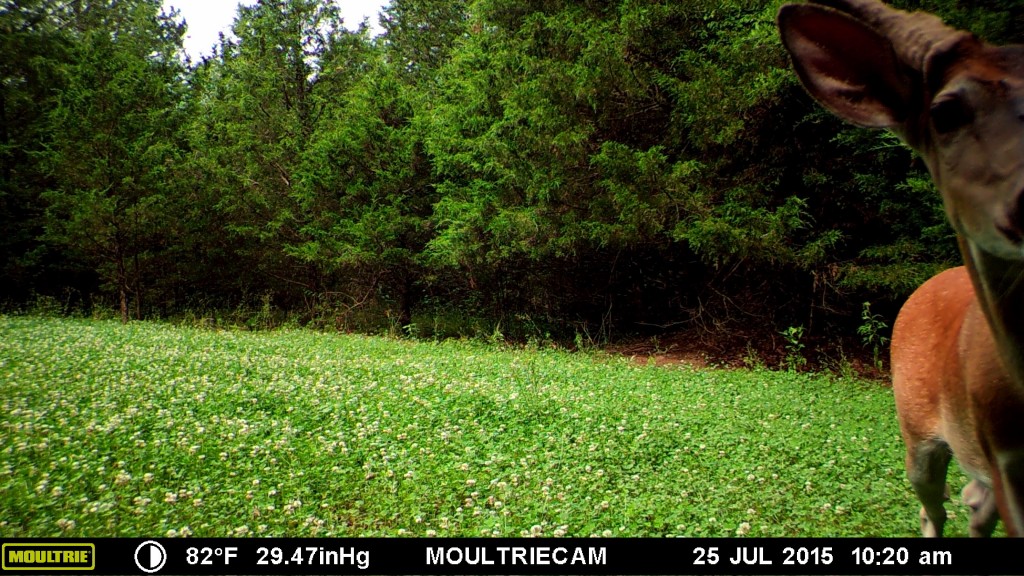 The first time I set up my trail cameras, I was so excited to have them that I completely abandoned thoughts about scent control and ran out to set them up and start getting some good photos. If you have not started taking advantage of what trail camera pictures can do for you, please don’t start like I did. Instead, use these trail camera tips to gain the advantages without alerting every deer in the area to your presence.  As you probably guessed, by forgetting all about my scent control when I first set up my cameras I ended up getting some nice face close ups on the first go around. 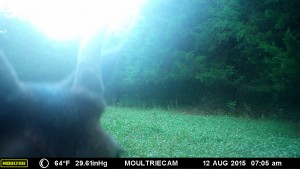 The photos used for the article were all taken this summer. This camera was set up by my father and was his first attempt at putting the cameras out for me. He has never been one to worry about scent control and yet he has more mature deer down than anyone else in the group. I will reveal what I believe is the secret to his success in another article because it’s beyond the scope of what we are talking about here.

The easiest way to make sure you get the most out of your cameras is to act as though you are going in to hunt every time you go to set up or check the camera locations. That means at the very least, a complete scent elimination spray down of you and everything that’s going to be entering the woods with you for the job. To use my dad as an example again, he failed to eliminate the scent of the camera which had unfortunately been sitting in my garage absorbing all sorts of odors during the off season. All of these pictures are of the same camera, caught by several different deer in only a month’s time frame. Luckily, many of them don’t seem to mind the odor and continued to feed around before leaving. The unfortunate part about it is that the ones that did not take too kindly to the camera tended to be the mature bucks like the one at the top of the page. Dad’s attempt was picked up by the deer within a few hours of putting the camera in. Though some of the deer may have already been aware of the camera, not one deer went to check out the camera during the two days following me going in to switch out the cards and the flow of pictures were consistent with prior to me entering the area. 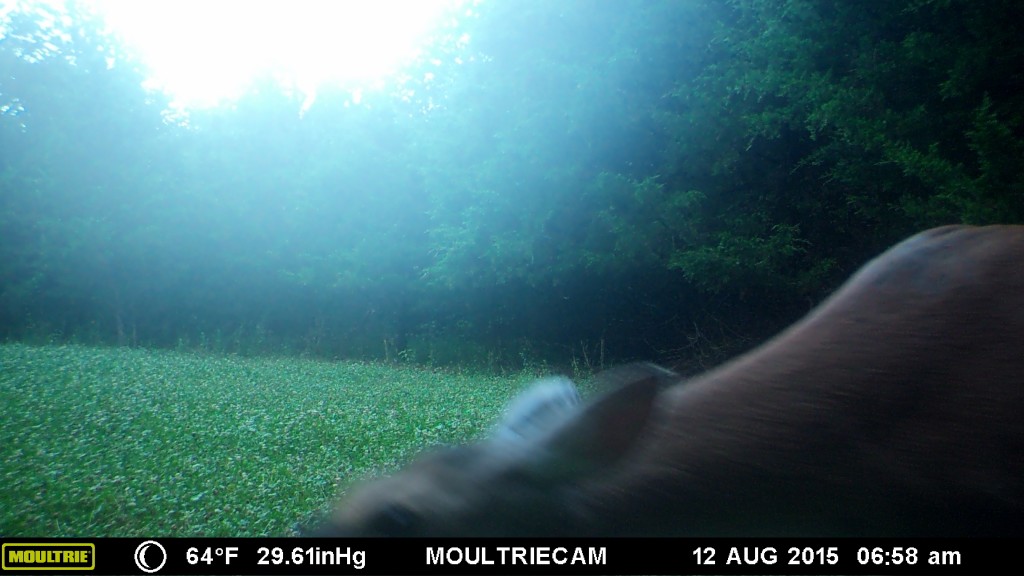 Another easy thing to get the most out of your camera is to attempt to have the camera facing North if at all possible. If not, the second best option is South. The reason that I don’t hold a North facing camera and a South facing camera as equals is because with a South facing camera, you have the chance of getting some glare at certain times of the day. Just like a rising and setting sun can ruin photos or even give empty photos when you set up a camera to face East or West, the same thing can happen on a South facing camera even though it’s much more subtle which makes it tolerable. Notice in two of the pictures above how there is a small distortion from the morning sun. This camera is facing directly South. That small amount of distortion is not enough to make me move the camera, but it does show up in every picture taken during that time period of the morning. Another really quick and simple tip is to make sure that you are using IR aiming screen if one is part of the camera you have. This will allow you to see exactly where a picture will be taken giving you the ability to fine tune the angle to cover exactly where you need to.

Many people will go out and find a well beaten trail and assume that the best way to capture things using the trail is to set up there camera so that it is facing perpendicular to the trail. Then when they go to review the photos become discouraged or blame the camera’s trigger speed because all they got were butts and bodies rather than being able to see what most of us are most interested in. Can you tell if the deer in this photo is a buck or a doe? 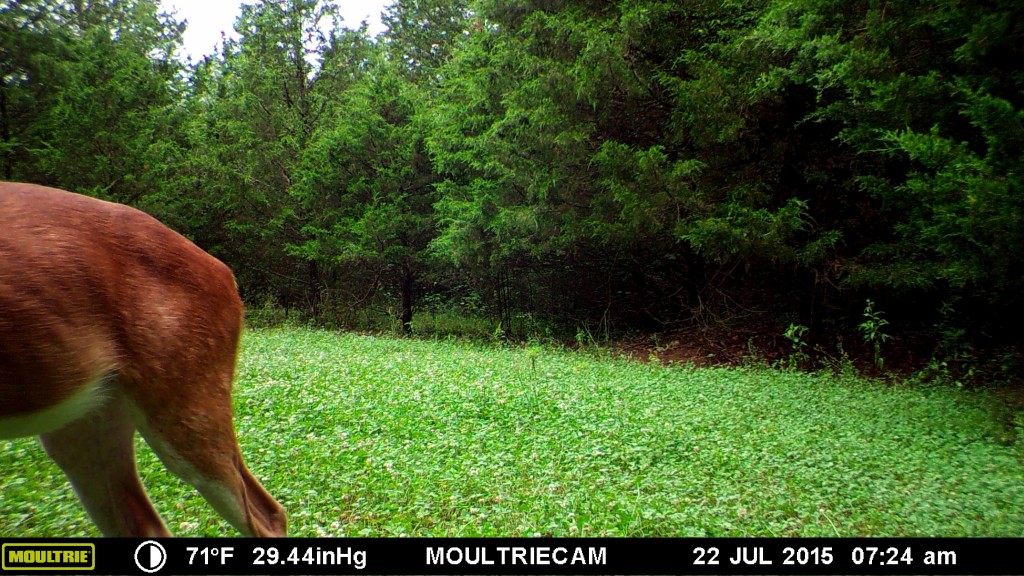 Instead of putting the camera perpendicular to the trail you are covering, try facing it along the trail. In the below photo, it looks as though I made the mistake of putting the camera perpendicular to the trail, and i did in fact get the picture below of the young buck walking along the logging road. During the two days I left the camera in that location, that little buck is the only photo of a deer that I got, which told me that the trail I was trying to cover was not being used (at least during that short time). 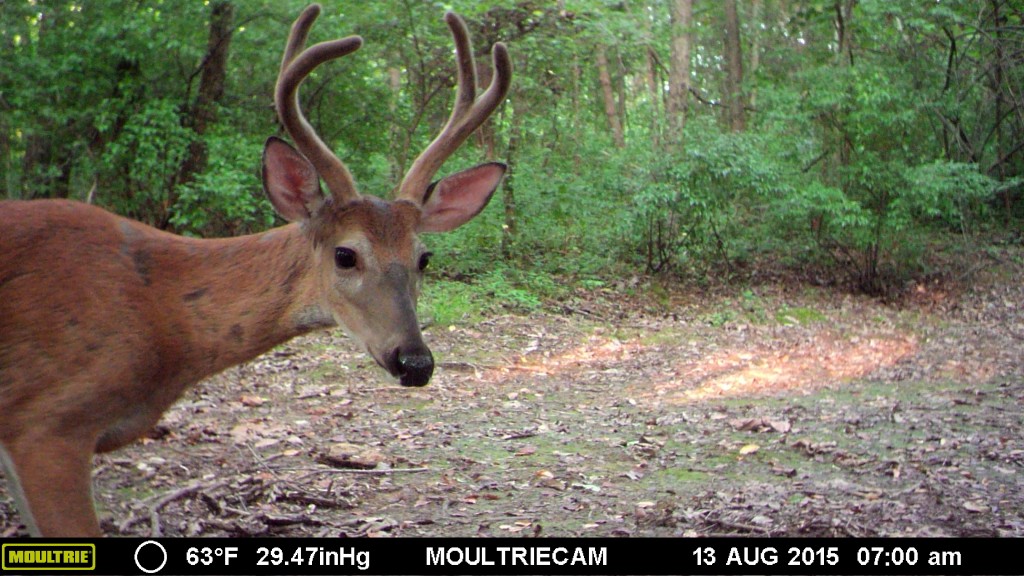 I was glad to get this photo though because it confirmed that the deer also use the logging road. That logging road is surrounded by thick woods and is within 40 yards of my wife’s stand where she had an encounter with a giant buck. I talk a little about that encounter here.

There are many ways in which to set up your trail cameras to help with your scouting, but using these trail camera tips will help you get the most out of each spot you chose. If you are able to avoid these easy to make mistakes, your learning curve will be reduced and you will be getting better pictures than ever before! For more information about scouting, make sure you check out the scouting tips page.