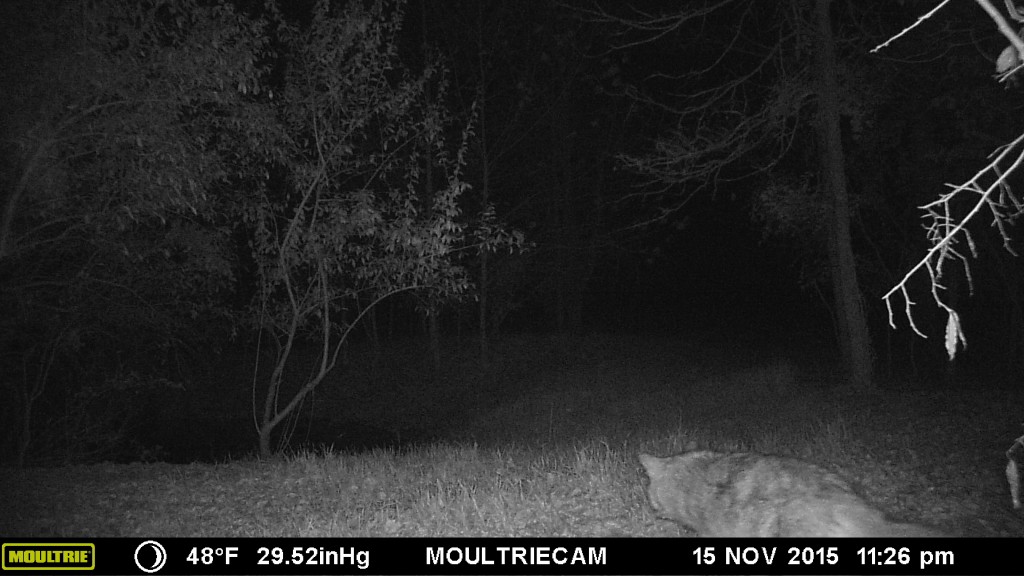 The recent trend on what you should be doing this time of year is trapping. I have hunted almost every single deer season for 18 years. When it comes to the places that I have hunted during that time, I have seen very few predators while actually on stand. Even since putting out trail cameras, we have gotten very few photos of coyotes or racoon or bobcats. This combined with the fact that we live 6 hours away and by law traps have to be checked at least once every 24 hours means we can not set a trap line on our Southern Illinois hunting land. Though we don’t get too many photos, I will say that I’ve noticed an increase in sightings over the last year. I don’t know if that’s because there are more of them or if it’s because the have just wandered in front of the cameras more often. There is more than one popular t.v. show that says we all need to be setting and running trap lines on our lands. Though I’m sure that they realize that it’s not really possible for everyone, I can’t help but wonder just how big or small of a percentage of us hunters are really able to get that done.

Trapping – Why I Shouldn’t Bother

There are quite a few reasons why I should bother to set a trap line on my hunting properties. First of all, as I stated earlier I am unable to check a trap line that is 6 hours away on a daily basis so the Southern Illinois property is immediately out of the question. As for my local hunting spots, I don’t have permission to. And even if I could, I have never once seen any predator tracks on the properties with the exception of the outdoor cats at the funnel. Because of that, I would have to attract them to the property before trapping them to get rid of them. It seems far simpler to leave it alone for the time being.

Trapping – Why I SHOULD Bother

Truly, with the reasons I stated above I don’t think there is a good reason for me to begin trapping. However, just because it doesn’t seem to be a good fit for me doesn’t mean that you shouldn’t be thinking about it. Personally, I haven’t found any tracks on the lands I hunt, but that has to be rare. I know that I personally have seen more coyotes in my area that I have ever seen before. In fact, I have spent a short amount of time trying to call one up close enough for a shot while I’m hiding inside the garage. No such luck so far, but I have a feeling that it’s going to happen by the the end of the year. Coyotes and other predators wreak havoc on both deer and turkey populations. For them, the spring time is great because it means that food is going to be relatively easy for them to find. If that isn’t enough of an incentive, the second reason is that the pelts that you get. When tanned these pelts an offer a range of different beneficial uses from rugs to blankets to art pieces. If you are interested in making money, people will pay you for the furs you collect as well. Just the other day I saw a sign from someone looking for coyote pelts and is willing to pay $50 per coyote. Could be a great side gig or a main income for a teenager just starting out.

In some cases, trapping can be a very beneficial activity. When you have enough land to manage and have the sign, I suggest creating a trap line. Not only will it help you keep the predator populations in check, but like I just mentioned it can also bring in a decent side income if you have a big enough problem or enough predators moving through your land. Notice that I’ve said predators this entire time and not Coyotes. The reason is that there are many more predators out there that affect the deer and turkey populations than most people realize. These predators could also be the reason that you aren’t seeing many small game species in your area. In an earlier post from a hunt this year, I mentioned that I had seen rabbits for the first ever while hunting in Southern Illinois. I’m not sure if they’ve always been there and I just never saw them or if they are new additions to the area because someone else has been doing predator control. As the habitat evolves and ages, the woods are providing things they never did before while also loosing certain features that may or may not have been used prior. Though we may never be able to or want to eliminate predators in the areas we hunt, it shouldn’t stop us from joining in on helping to maintain that balance if we are able to. Happy Hunting (or Trapping)!