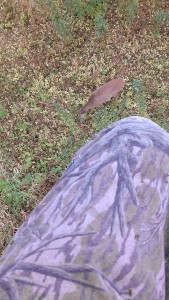 This evening I was able to get out to my funnel spot for a little bit of treestand therapy. I was extremely late to the stand, but it was the earliest I could make it out there due to family obligations. I love spending time with my family, but with the perfect weather conditions hitting this morning, I was a little disappointed that I was unable to get out there before 2 hours to dark. With the funnel stand location, I am unable to set up treestands per the landowner, so I am forced to try and use a climber. I had never used a climber before and was actually looking forward to climbing a tree this afternoon for the first time using one. Unfortunately, I still have yet to climb a tree with a climbing treestand. Instead, I got my treestand therapy by climbing up a half torn out ladder stand. It was extremely uncomfortable as you would imagine and to make matters worse, I forgot my safety harness at home. Because of that, I was forced to use the rope that I use to pull my bow up as a makeshift safety harness so that I at least had some protection. The whole reason I had to use the half torn out stand to begin with is because I was unable to find a tree that I could climb more than 5 feet up before hitting a major branch and I did not bring a saw with me. Remember, I had about 2 hours of daylight left to begin with! Any tall straight tree I did find happened to be standing dead trees that would have barely been big enough if they were alive. I think that what I’m going to end up having to do is bring in climbing sticks and a hand on stand from now on. Also, I need to get those half torn out treestands all the way out because they are on pretty much the only two trees that are big and thick enough to easily support a hunter. After all that, I didn’t see a single deer this evening and to be honest, it doesn’t matter. I had a great evening of treestand therapy in nature. Happy Hunting!