Can you hang your treestands to early? 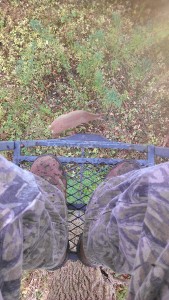 Personally, I don’t think you can possibly hang your treestands too early. The earlier you have them in place, the more likely it is that the deer in the area will be back to ignoring their presence before you are sitting up there.  All the stand locations that we have established have had a stand in place since we chose the spot.  By leaving the stands up all year long, we know that the majority of deer will just walk right on past them. There have been hunts where a smart old buck has walked out in to the field where I was hunting and immediately looked up to the stand as though he knew it was something unnatural. Luckily for me, I was completely still and within a few seconds the old buck continued his path into the field to feed. I unfortunately missed that shot, but that’s besides the point. The stand where that happened had been up for 3 seasons at that point, so it’s possible that the buck had had a previous encounter with a hunter in that location. So far, he is the one and only deer that has looked up at the stand while I was hunting it. Most deer pay absolutely no attention to it anymore. Over the last few years, the stand has actually gotten more hidden due to some oak saplings growing up around it to provide more cover. In the picture to the left, you can clearly see a doe standing at the base of my treestand as I hunted a friend’s property from his stand location. The only reason that this was possible was because this stand was put in place during early summer, giving the deer more than enough time to get completely used to it being there and eventually ignoring it’s presence all together even though there is zero cover for the hunter sitting up there.

Can you hang your treestands too late?

The simple answer is yes. But as with everything in life, this is not a hard rule. I have many friends that have hung a stand 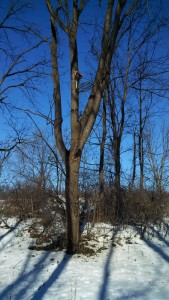 and hunted it immediately and had success. I’ve also had friends that have hung treestands a couple days before hunting them and also had success. On the flip side, I’ve had friends that have hunted in those situations and not seen a single deer. There is no definite answer when it comes to deer behavior and human intrusion. Deer in some areas will not care less about having a little human intrusion and in other areas deer will not tolerate any human intrusion what so ever. if you have no choice but to hang stands just before the season (or during if you’re really late), there a few things to keep in mind to minimize your intrusion. First, spray everything down with scent killer. This means you, your clothes, your gear, the stand, and anything else that will be joining you in the woods. You will also want to use  treestand access strategies to get to and from the hunting location. Using dry creek beds or ditches to access the area will help keep you out of site as you make your way in to hang your treestands.

So when is the right time to hang treestands?

If you have total control over when  you can get out to hang treestands, the best time to do so is in the spring before the bugs come out and the foliage makes seeing difficult. By hanging treestands in the spring, you are also giving the deer as long as possible to get used to your treestand and for the human scent to be gone if you don’t always practice good scent control. Again, this is the optimal time to hand new stands as well as re-hang stands that you took down immediately following the hunting season. Whenever possible, leave stands up all year long. Permanent stands are a great in that you have no choice but to leave them all year. The only thing I would say about that though is to make sure a location is going to be a consistent producer before taking the time to build one. We have several permanent stands on our hunting property, and it has been nice to simply go in every summer to make sure shooting lanes are cleared rather than having to hang the stand and clear lanes during the heat of summer.

The best time to go out and hang your treestands is any day that you can. However, if you have the ability to plan it out, Spring is the time. The goal should be to give deer as much time as possible to get used to the stands while also allowing you to hang them when it’s comfortable. I can tell you from experience that hanging treestands in mid to late August is not fun. The heat combined with the bugs during that time of year can make for a miserable time in the woods which could make you hurry up or miss something that could be the difference between a harvest or not during the coming season. Though it’s no longer the optimal time to head out and hang your treestands, it’s never too late if you follow good scent control and treestand access principles. Good luck this season!

One comment on “Treestands – The right time to hang them”