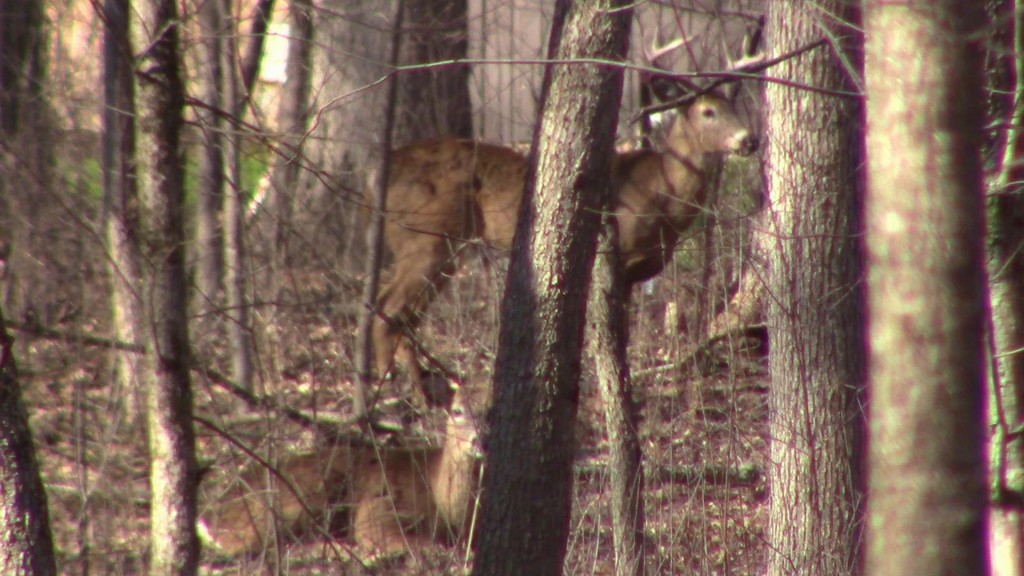 If you read my last post and watched the video, then you know that when I went out on a late March shed hunt I ran in to a young buck that still had is full set of antlers. Though I knew we had a pretty mild winter, I had guessed that a majority of buck had already shed their antlers. The above photo is a snapshot taken from the video showing that young buck. I was definitely surprised to see a full racked buck this late in the year. With just a single sighting, I figured that it was just a buck that is a late dropper. As you can see in the photo he looks plenty healthy as well so I filed the information away for future use as moved on.

Only 2 days later, I glanced out my front window to look for deer in the hay field across the street (as I often do) and noticed 3 deer feeding. I grabbed my binoculars and was astonished to see that all three of them had a full set of antlers on them. I quickly ran through the house to grab my video camera and headed outside. I stood at the end of my driveway and took a couple short video clips of  several deer out in the field (4 more deer had joined the three bucks). The below photo shows two of the three bucks with their full set of antlers on March 27,2016. 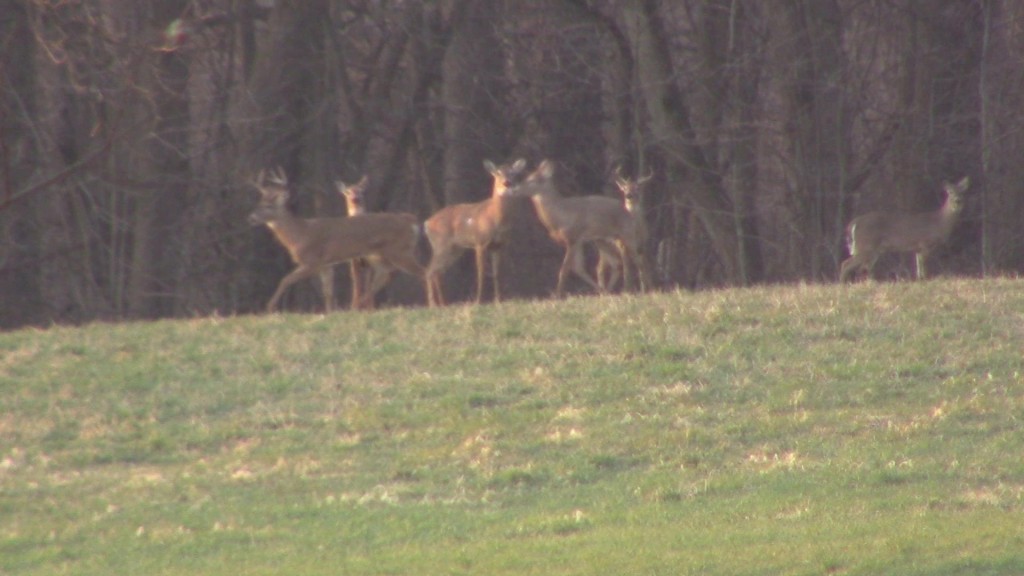 So When Do Deer Shed Their Antlers?

As with everything whitetail, there is no simple answer to the question “when do deer shed their antlers?”. The answer to that question depends on many variables. One of the most influential variables is weather. During a warmer than average winter, there is less stress on the deer herd. This makes them stronger and thus, able to hold on to their antlers longer. Other factors that effect the timing of when bucks shed their antlers include overall health, photo period, severity of rut, and genetics. It’s very hard to predict exactly when a buck will shed his antlers unless you have a long history with a particular buck and through that have come to know his average range of dates that he has shed his antlers.

Though I was surprised to see so many bucks with their antlers in late March, I figured that they would all probably drop within a week or so since it’s almost time for them to start growing a new set for next fall. Throughout this whole time, my wife was also seeing a group of deer that included a buck still sporting his antlers. She has seen him as recently as April 5 on her way home from work. It’s just another reminder that no matter how much I learn about the animals I chase, there will always be something else they have to teach me. So the next time you have a friend ask you “when do deer shed their antlers?” you can tell them, “That depends”. Happy Hunting!

One comment on “When Do Deer Shed Their Antlers?”