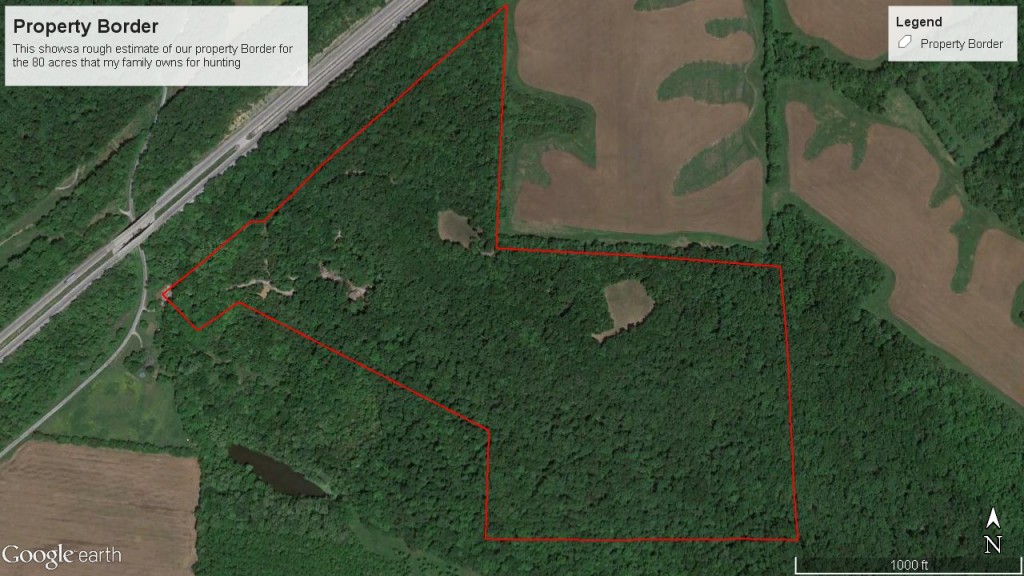 My family now owns the 80 acres that I have hunted on since I was 12. There have been many changes made to the property since we took over. First off, my father’s dream has always been to have an1800’s style cabin. Even so, the first project was to create a drive way and clear several areas on the property. Which ever locations weren’t selected for the cabin site would eventually be turned in to food plots that we still maintain.

Once the driveway was finished, the locations cleared, and the cabin spot picked out. We then went to work on the food plots. The only problem was that we didn’t have any equipment to do so. At the time, we only owned a 4 wheeler. Now a days, there is plenty of equipment available at a decent price but back then it was far more cost effective to purchase a tractor for our work. So dad went to the farm auctions for the next few months to find the right one for us and all the other attachments we would need. It wasn’t much, but it got the job done.

So, fast forward to today. We are now working three different food plot that total less than 3 acres, and we have a small man made pond on the edge of one of the plots. We also have several dry creeks that only have water during severe storms with lots of water coming down the hill. There is an old quarry that always hold water as well, but that is directly behind the cabin. Any game that chooses to drink from there must first pass within 10 yards of the cabin. Not very likely, though it may get used when no humans are present on the property.

The equipment that I am able to use is as follows:

Needless to say, I will have my work cut out for me if I want to really improve the hunting opportunities I have. I’ve included an overhead view of the property as it sits right now. The property harvest rules are pretty loose. Any buck that is 8 points or better is fair game and does are fair game come Friday afternoon of shotgun season (for those that only hunt the shotgun season). The property at this point is mainly used for shotgun hunting, so stands are really only set up for longer shots than I want to take with my bow so I will need to pretty much start from scratch on stand locations. I do have one stand that is set perfectly for an early season doe harvest on the edge of a big field during a North or North East wind. However, I plan to remove that stand because the access is horrible and we have educated deer far too early in the season of our presence. That stand produced multiple sittings of mature bucks last year even though only one of those sitings were during legal shooting light. Unfortunately I was unable to capitalize on that opportunity and I ended up having tag soup last season.