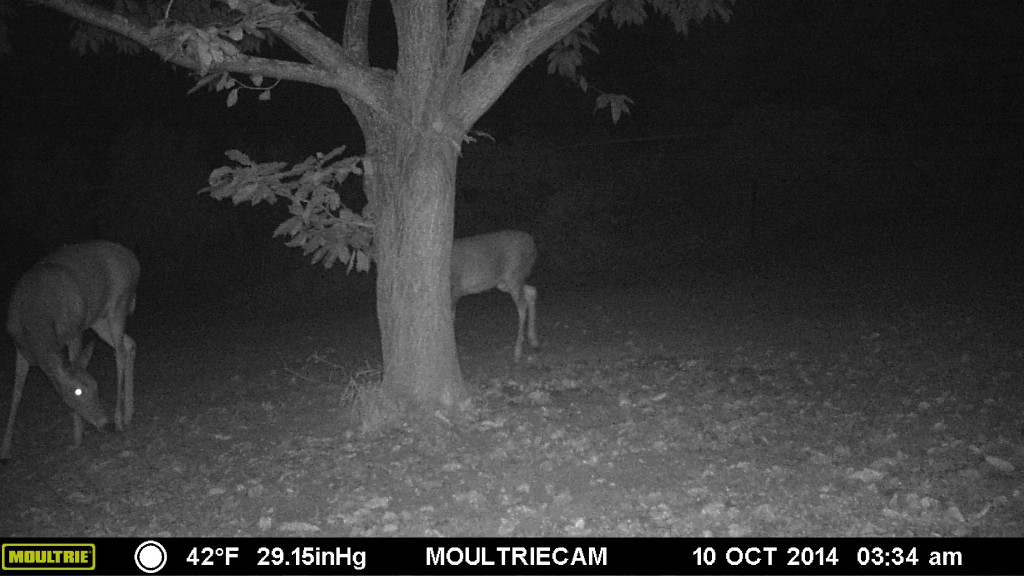 Over the last 3-5 years I’ve been hearing a lot about chestnut trees for deer and how good of an attractant they are for deer. In fact, there is even a commercial attractant based on chestnuts. With all the rage, I have yet to find really good evidence that deer actually like chestnuts. Don’t get me wrong, I have absolutely no doubt that deer will eat chestnuts because I have picture proof as you can see above. These two deer walked around for almost an hour eating chestnuts off the ground.

My Chestnut Trees for Deer

When I first moved in to the house, the previous owner informed us of all the deer that he saw in the yard and how he used to grow extra veggies in the garden to make up for how much the deer ate. Also on the lot are 4 chestnut trees that are very well established and drop a huge crop of chestnuts every year. Once first hearing about how deer love chestnuts, I got extremely excited and couldn’t wait to put up a camera to see for myself. At the time, I didn’t have a camera though, so I was only able to try and confirm it with tracks when there was snow on the ground. It didn’t prove anything though because we never got snow until the majority of the chestnuts were gone anyway. I did get deer tracks through the yard passing the trees, but there really wasn’t anything that would tell me if they were eating the chestnuts or not. Once I finally got a camera in 2014, I immediately set it up in the back yard to see when I could capture. From the time I put it up to the time that I moved it to one of my hunting properties, I only got the one encounter with deer. I was mostly competing with the squirrels and chipmunks. I was definitely disappointed. The only thing that continued to give me hope was that I only had the camera up for about a month before I moved it so it is possible that I just missed the peak time. 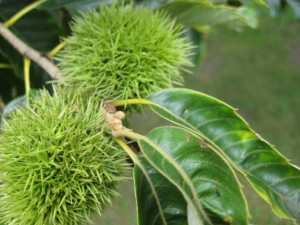 After my relatively failed attempt at seeing deer eat a bunch of chestnuts, I decided to try setting some out on the property down south. So, during the summer I took a bunch of chestnuts that I had saved over the winter and put them out in our clover field in a pile to see what who would eat them. Prior to me setting those chestnuts out, I had deer on camera and eating clover religiously. Every single morning and afternoon. Once I put the chestnuts out, I did not get a single picture on the camera for an entire week. Once the deer did start coming back, they did not seem to pay any attention to the chestnuts unless they happened to walk close enough to see them. If they did see them, they would check them out, but I could not tell if they actually ate them or not because the pile itself did not show up on the camera. I want to point out that because the chestnuts were set out during August rather than during October when they would naturally be falling could very well have played a role in my observations.

I unfortunately have come to an inconclusive decision so far. I absolutely plan to do some more of my own experimenting with it, but so far I have just not seen the results that Dr. Kroll talks about below. As I said at the beginning, I know without a doubt that deer do eat chestnuts. I just have been unable to determine whether or not it’s because there isn’t anything better available or if they actually do prefer chestnuts. I’m sure that as with everything else, it’s going to come down to a time of year that the chestnuts probably could be preferred over other available food sources while during the rest of the year chestnuts fall low on the totem pole. As of right now, I’d say the jury is still out so I wouldn’t be so quick to spend hundreds or thousands of dollars on chestnut trees for deer. I plan on planting a few on our property down south solely because I have access to free trees, I just germinate them myself. Happy Hunting!