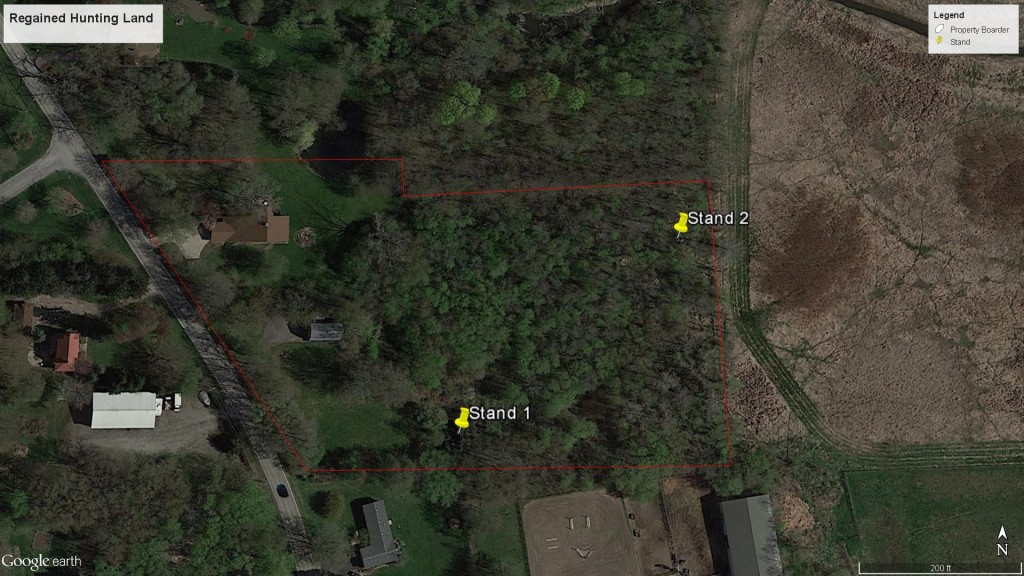 How I lost it to begin with

Last year I had a spot on an awesome funnel. I actually used the aerial photos from that spot in my article regarding Scouting for Deer by using aerial photos.  Anyway, I was not the only person who supposedly had permission to hunt the place. There were three different groups of hunters that would periodically hit the woods on this small 9 acre suburban tract. Of the three groups, none were able to connect on a deer last year. However, someone did manage to poach a deer off this property. On top of that, the stands that all three groups used were set up by one person from one of the groups. Well, as it turns out, they decided to leave the stands up all year instead of taking them down at the end of the season. When the landowner saw the stands up, they were not very pleased. We eventually found out that the landowners have had an ongoing problem with one particular poacher and were not actually aware that anyone was hunting the land. Since I am one to do my best to follow the law, I immediately marked the place off since we did not in fact have permission from the land owner.

How I regained my local hunting land

Throughout the summer, a friend of mine that lives on the property has continued to talk about needing law care services because everyone that they hire has completely flaked out on them. Each and every time that he mentioned it, I would come back with “well, I’m more than happy to work something out. I’d love to get permission from the landowner to hunt the place.” It would be a while, but I would inevitably hear again how the new lawn mower let them down yet again and would politely remind him of my proposition. Well, FINALLY last night he sent me a message and asked if I would like the job of mowing the lawn. Long story short, I offered a matching rate of $70 per mow, or $30 per mow with written permission from landowner to hunt. Needless to say, they were more than motivated by the discount to get in touch with the landowner to discuss my hunting privileges. This could not have come at a better time, the season here in Illinois starts in just 8 short days and I am PUMPED!

I had totally thought that I was never going to get to hunt that great funnel ever again once I found out that nobody truly had the landowners permission to take a deer on that awesome hunting land. It just goes to show that you should never give up, especially if you find a place like my funnel. The only thing that I will have to contend with this year is the poacher. The word around town is that this guy has been sneaking back to hunt this funnel for over 20 years. I wish that I knew the name of the guy because I’d turn his ass in in a heart beat. Anyway, I just wanted to share my excitement because the news just came a few minutes ago. I also had some other great news that I will hopefully be sharing tomorrow. Happy hunting!